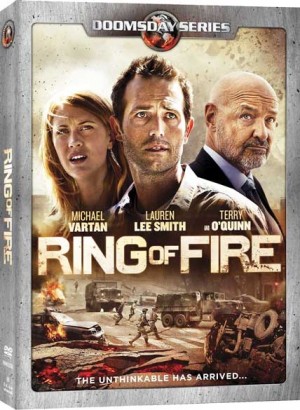 I never really noticed or paid attention to ReelzChannel, now just Reelz, an odd collection of off-network fare, cross-promoting what else is on cable and original programming. So, when Ring of Fire crossed my desk, I knew nothing about it. A miniseries that aired in the spring, it features a familiar cast headlined by Michael Vartan (Alias), Terry O’Quinn (Lost), and Lauren Lee Smith (The L Word). It’s a low budget disaster movie that traces how deep drilling for oil accidentally taps molten lava, triggering a chain reaction that brings the world close to an Extinction Level Event.

The small town is filled with the usual cookie-cutter assortment of characters with conflicts aplenty such as the oil rig worker who lost his son due to his brother’s carelessness and guess who’s out of jail in time to use his knowledge of the old mines? Or that the CEO behind the drilling is at odds with his daughter, whose son is trapped on a school bus when things go boom. It’s a finely stuffed recipe for disaster and it’s all competently assembled by writer Michael Vickerman. What’s missing is a shred of unique dialogue or interesting characterization. Under Paul Shapiro’s flat direction, the actors are surprisingly flat with the notable exception of Sanctuary’s Agam Darshi, who infuses her Audrey, a geologist, with some semblance of life.

Part one sets everything in motion and of course, those in control ignore the warnings from those who really know what’s going on under the ground. Then, when things go bad, they scramble to contain the damage until the entire world is threatened because a ring of volcanoes are all about to go kablooey. The catastrophe catches the town, the corporation and everyone but the federal government short.

In part two, we learn there’s a remote chance a sonic device can trigger a fault before the big eruption in just 24 hours. Surprisingly, the government can access the bomb and retrofit a test module for use on Venus in that narrow window so Vartan’s Dr. Michael Cooper can pilot it deep with and trigger the device. (In retrospect, this is more plausible than Spock going into a volcano to neutralize it using the cold generated by a cold fusion bomb.) The US Government is remarkably competent here so that’s something different for a change.

Still, Vickerman slows things down enough so Vartan and Smith can flirt and stare deeply into one another’s eyes, which feels out of left field. Similarly, he massages his temples to deal with the growing aneurysm that requires surgery, a plot point that comes up repeatedly but is never paid off making one wonder why it’s here at all.

There’s plenty of sermonizing and speech making and people running around but it’s passionless despite the pacing, which Shapiro handles nicely.

The miniseries is being released un Gaiam Vivendi’s Doomsday Series umbrella and is presented as it aired rather than be edited into a seamless home video experience. There are no extras to speak of, just a preview of their next entry Eve of Destruction (which I bet is a better song than movie).