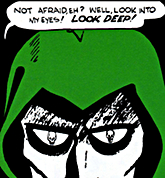 I caught the movie musical version of Les Miserables recently (and I will thank my brain to stop playing snippets of the soundtrack over and over and over again) and was struck by a line sung by the hero, Jean Valjean, late in the story: “To love another person is to see the face of God.” That line has always pierced me (I’ve seen the stage version of the show several times).

I was raised Roman Catholic but I am now a Practicing Agnostic by which I mean that I don’t know that there is a god but I don’t know that there isn’t, either. Lately, I’ve come to accept the possibility of something like a god out there without subscribing to any of the versions that different religions put out as the One True Version. Even within Christianity, there’s no one vision of Jesus. There are wars over that vision; my Jesus can beat up your Jesus. Within the Moslem community, Sunni makes war on Shi’ites and vice versa. And so on.

In each case, the face of god reflects the belief of the believers and the society out of which that face was carved. Is one truer than another? Not for me. Look, I like the Bible (mostly). The stories in it are the tradition with which I was raised and that means something to me. Do I accept it as the literal truth? No, any more than I accept the Norse gods or Marvel’s version of them as “truths.” Walter Simonson’s depiction of Thor as the Frog of Thunder enchanted me, but I don’t worship it.

One of my proudest achievements in writing comics was the run that Tom Mandrake and I did on The Spectre over at DC. In it, I explored the issues of redemption, of divine punishment, of good and evil that were rattling around in my soul. Even though I was no longer a practicing Roman Catholic, my quibbles were more with the practices of the Church than the beliefs. I was able to explore theological questions I had about those beliefs.

I don’t think I could write The Spectre today as I did back then. I’m not the same person; I’ve changed. I don’t have the same beliefs as I did then so the theological questions and quibbles I had when I wrote the Spectre are no longer relevant to me.

How people see God tells me less about God than it does about those people. Stern, capricious, loving, aloof – these can all be faces of God. God is a reflection of that God’s worshippers and it changes over time. Take a look at all the portraits of Jesus over the years – he’s morphed from a Jewish rabbi into the blonde haired, blue eyed Jeffrey Hunter in the movie King of Kings. I’ve seen striking images of Jesus as a black man; strong and necessary images re-interpreting Jesus as part of the African-American community. Latino as well. Asian. Female. Why not?

I’m not trying to tell anyone that their version of God is wrong; I’ll leave that to Bill Mahr. My doubts are my doubts. However, I have issue when someone tries to tell me I have to think, act, or believe as they do because that’s the truth. That’s their truth and I accept it for that but it’s not my Truth and I don’t accept it as the universal Truth many of them claim it to be. One person’s religious beliefs do not trump another person’s rights. Your God is not my God.

Now if you’ll excuse me, I think I’ve just seen the Flying Spaghetti Monster drift by my window. I may have just become a Pastafarian.