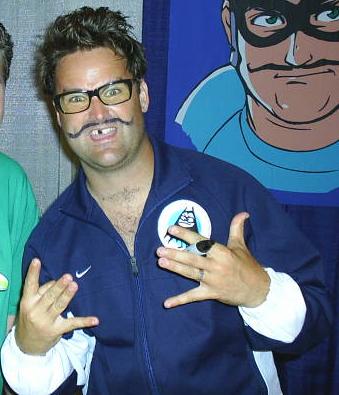 Christian Jacobs started out as a child actor playing the slightly older Joey Stivic in the All in the Family spin-off Gloria.  Since then, he’s not only triumphed as the creator of kid show juggernaut Yo Gabba Gabba, but as The MC Bat Commander, has been the charismatic leader of superhero ska band The Aquabats.  After a long career in the clubs of the world (coming up on their twentieth anniversary) the band broke into television last year with The Aquabats Super Show on Hub Network. Lauded by critics and attracting kids in droves, the show’s second season premieres this Saturday on the network (check local listings).

Christian took the time to speak to ComicMix about the series and the long strange trip it took to the screen.  He’s proud to get the show on the air, and even more happy for it to make a second season. “We’re blown away” he explained. “We would have been happy just to get ONE season. But having said that, we put a lot of blood, sweat and tears into that one season, and to be ‘one and done’ would have been a little disappointing.  But if you take a step back and think about the miracle that The Aquabats even got to make a TV show…having a second season is just mind-blowing.  A real-life band that got to make a fake, goofy show about themselves…I don’t think that’s ever happened before.  You have shows like The Monkees, where the bands were put together by the studios; Big Time Rush, things like that.  But a real band…being a part of that miracle, and getting to do it twice, is just unbelievable.”

The desire to get The Aquabats to the small screen has been part of the plan almost as far back as the band’s been in existence, Jacobs explains.  “Right about the time we did The Fury of the Aquabats, Between that and Floating Eye of Death!, we did a pilot for Disney.  And that was something we all thought was going to go somewhere. But looking back, looking at that pilot, I was all, ‘Oh, wow, THAT didn’t work out…’ “

He’s got a good idea as to why the show worked now, as opposed to years back –  “It seems like the timing, although it’s been almost twenty years, the timing is almost perfect.  I think the sensibilities in the show…kids are more sharpened to stuff that’s random and silly, and doesn’t make sense sometimes.  I think maybe even more than kids, cause kids are always down with that. I think there’s enough shows that doing stuff like that, and being successful, that studios are letting things go. Like, there’s no chance there would have been an Adventure Time, fifteen, twenty years ago; it’s just too crazy and random.  And that’s rad!  And it’s the same with [us]; without a network like Hub Network, you don’t have a show like The Aquabats.  Because people don’t wanna take risks.”

The show has been the hit with kids as it was intended, and that new audience has started to flow back to the band’s live performances.  “We played a local show here, last summer, right after the show started airing. And the influx of young kids at the show definitely created the thought, “Wow, we definitely need to have a different show when we go tour; do a matinee and an evening show.  It’s not that the crowd doesn’t mix, we have kids that want to slamdance and get rowdy, and that’s okay, it’s always been like that. But when you have SO many kids, nine and ten year olds, in the pit, it makes things a little bit different.”

Christian and the band are quite proud of the show.  “What’s been great, and really gratifying, is that all of us in the band have been so close to the show, for so long…in the back of my brain…heck in the front of my brain, I’m thinking, ‘I hope kids like this, because I like it, I think it’s funny.’  I like all the references and everything in the show, but is it gonna resonate with kids?  Cause it sure resonated with me, I like all that stuff, I think it’s stupid. But there’s a lot of inside jokes, a lot of references, that adults get, but kids maybe not so much.  But the fact that kids do love it, and that’s the demographic we’re aiming at, that’s a big relief.”

Part of the show’s appeal is the constant barrage of references to pop culture, both old and new. Their mobile headquarters, the Battletram, is equal parts the eponymous vehicle from Ark II, the Doctor’s TARDIS, and the Big Baloney from The Kids From CAPER.  “We want to wear our references on our sleeves.  We don’t want to rip any of that stuff off, we want to glorify it; we want to say “How awesome was the stuff we grew up watching?”  Now here it is again, in a big loaf.  That’s what The Aquabats show is – it’s a loaf, it’s a big loaf of stuff. You can quote me on that. “

While trying to get The Aquabats on the air, Christian took a big of a turn and started looking at the state of entertainment for an even younger audiences.  “We were really having trouble getting the Aquabats show sold, getting people to buy onto it. We had a couple of ten-cent pilots, and a couple of things we’d done, but we were having trouble getting people to say ‘OK, yeah, you can go and make your crazy show’.  And a big part of it was the climate in TV at the time.  Reality shows were just breaking, and they were just breaking HUGE.  Survivor was getting really big ratings, so it was hard to get people behind our show.  So my buddy Scott (Schultz, YGG co-creator) and I, around that time we were trying to develop the show, we started having families of our own.  We were watching kids’ TV, and I noticed there was a big shift in younger kids’ programming. It seemed like everything was very compartmentalized, like “this show is for kids aged 1.5 to 3.2”. Very homogenized.  Whereas we grew up watching The Electric Company, and Sesame Street and Zoom, all this variety. All this singing, and songs, and you never knew what was coming around the corner.  And my parents would watch the shows with us, and chuckle, at like, Ethal Merman jokes. I didn’t know who Ethel Merman jokes, but my parents would laugh. You don’t get that from the majority of preschool shows today – they don’t have pop-culture references in them.

So we said, hey, let’s shift things up a bit; let’s keep The Aquabats in our pocket. What if we try and do a preschool show? Let’s try and do a classic magazine-format show that could include parents. That could have hip-hop and punk, and electronic and dance, and different things in the show. Not just musically, but visually; art, animation, and style. And almost immediately we thought, it has to be a show with walkaround characters, like The Banana Splits or H.R Pufnstuf. And we’ve got two walkaround characters we’ve already built (Cyclopsis and Weedy, who became Muno and Brobee respectively), and they got great responses live (at Aquabats shows).  People would go nuts when they came out on stage, people loved the characters.  So I knew right away, from the audience, that those characters would work.”

With next year being the twentieth anniversary of the band, Christian has more than a few events planned, including a new Cadet Summit (their recurring fan conventions) and most importantly to newer fans, new Cadet Kits.  “Definitely next year!  The cadet kits have always been such a rad thing, but we’ve always done it ourselves.  It’s been very hard to find the right fulfillment partner, cause we need help.  We can’t do it ourselves anymore; to put it in the envelopes, and lick the stamps, it’s crazy. “