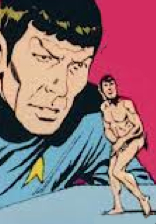 Some random thoughts about Star Trek: Into Darkness.

I loved the original series when it started on NBC in 1966. It was around the time I started to read science fiction, so it felt incredibly reinforcing to see my newly beloved genre on a screen in my home. I thrilled to the smart plots, and didn’t care about the cheesy special effects. There weren’t any other kind on television at the time. I loved the banter among the leads, especially from my favorite character, “Bones” McCoy. I complained as loudly as a teenage girl can complain when it was cancelled. That said, I only watched it in syndication sporadically, and I never got into any of the sequels.

Not even the one with Scott Bakula, whom I adore.

So when J. J. Abrams was tasked with reinventing the franchise, I wasn’t too upset. If he took liberties, he took liberties. Either the movies would be good, or they wouldn’t. As someone who read all the Ian Fleming Bond books and has seen every James Bond movie, even the terrible later Roger Moore ones, I have a pretty strong stomach for filmmakers who take liberties with their source material.

Kirk is really a macho asshole, isn’t he? I mean, you could tell from the original series, but it was the 1960s, and macho assholes were all the rage. It was really obvious in this movie. Yeah, he learned a lesson, and grew as a human being, but I suspect he would still be really annoying to sit next to on an airplane.

Bones may still be my favorite. In this particular movie, he was stuck regurgitating all the catch phrases, and yet Karl Urban still manages to maintain his poise. Not easy. Just ask Joe Biden.

A few female characters were actually allowed to have story lines, or at least the inference that, if we looked at the story from another viewpoint, they would be the heroic characters. Zoe Saldana as Uhura is especially brave. It’s as if her life is about more than just being in a relationship with Spock.

I would hope this is an indication of the film makers’ perspectives. Fringe had a female protagonist, as do many other 21st century entertainments.

Certainly, the women on Game of Thrones are the most compelling characters, and that’s one of the top-ten highest rated programs on television. There is money to be made with giving women in the audience someone to admire. Yay, capitalism!

A lot of the reason I went to see this movie in the theater, instead of waiting for it to show up on cable, was Benedict Cumberbatch. He is a wonderful villain, just as he is a fantastic protagonist. And he’s a commanding presence on screen, except sometimes I get distracted because he reminds me of Neil Gaiman .

I am not the only person distracted, although not everyone thinks he looks like Neil. Some are reminded of others.

As the summer goes on, and more blockbuster movies open, you could do worse than spend a couple of hours on the Enterprise. Live long and prosper, my friends.