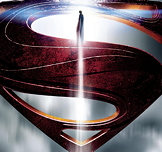 They still haven’t made me all excited about The Man of Steel, but at least by now we’ve been given the opportunity to see where it’s going. It’s the human story about a guy who isn’t human, superior stranger in a strange land, trapped in a world he could easily remake and he’s as humble as he is confused as he is powerful.

O.K., fine. That doesn’t compensate for the repetitive redundancy and duplicative dynamic of their restarting the franchise and retelling the origin and screwing around with something that’s been around 22 years longer than the 50-star American flag.

Not that I have an attitude about it. Honest, I hope The Man of Steel is thrilling and successful. The word out of Hollywood – a bitchy and petty place on its best day – is that if MOS fails, say bye-bye to the Justice League movie. They’ll just continue to grind out teeny-bopper versions of their characters for The CW, or whatever they’re calling their teevee network this year.

Superman deserves better than the dark self-obsessed trailers we’ve been seeing and, again, I hope the movie transcends their promotion. Back in 1978, before today’s latest Warner Bros. executives could walk (yeah, there was another upheaval in the corporate order last week), Richard Donner did something nobody had ever done before: he treated a major superhero seriously and respectfully as a cultural icon. In the process, he created a whole new genre of motion picture and he wound up making a massive fortune – for Marvel Comics, who, unlike Warner Bros., got the point.

When it comes right down to it, the origin is irrelevant. It’s a macguffin, an excuse upon which to hang a story. Iron Man built himself. Incredible. Spider-Man got bit by a spider. Amazing. The X-Men got themselves born. Uncanny. Now tell us a story worthy of our massive financial investment in your picture because, outside of idle gossip, we don’t truly care how much money you spent on your financial investment. Movie-goers just want to have fun.

This advice comes way too late, but that’s okay. They wouldn’t have listened to me earlier (although the last time they did we saved The Flash’s superhero costume in the teevee series). If Warners wants to reboot the Superman franchise and create a successful DC Comics superhero movie sub-genre, they should follow Donner’s lead and treat their characters seriously and respectfully as cultural icons. Give us a great story and make us care about the characters as they exist today. Keep Kal-El’s backhand off of his forehead.

In other words, get on with it. Stop trying to imitate Star Wars – that’s the wrong genre. Stop imitating Greek tragedy before somebody remembers Lysistrata was a satire. Stop pissing on the past just because you’ve got a big… budget.

Or, failing that, get Samuel L. Jackson and Robert Downey Jr. to drive a Hummer full of money onto Joss Whedon’s lawn and ring the doorbell. In Hollywood, imitation is the sincerest form of co-optation.