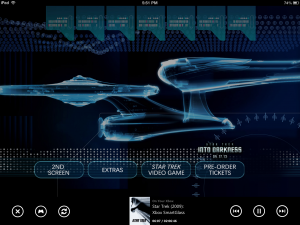 Just in time for the theatrical debut of the highly-anticipated STAR TREK INTO DARKNESS, Xbox 360 owners can experience director J.J. Abrams’ original STAR TREK like never before with Xbox SmartGlass.

Using a SmartGlass-enabled tablet or phone, the STAR TREK SmartGlass experience delivers behind-the-scenes content, deleted scenes, concept art of the U.S.S. Enterprise and more, all time-synched with the film.  The second screen intelligently interacts with the Xbox 360 to elevate the entertainment experience, allowing viewers to boldly go inside the phenomenal reimagining.  Plus, the STAR TREK SmartGlass application even includes a sneak peek at one of the biggest movie events of the summer: STAR TREK INTO DARKNESS.

The STAR TREK SmartGlass experience is available now on Xbox 360.