THE MUSIC MAN BEHIND THE FICTION-CHARLES BOECKMAN AND JOHNNY NICKLE!

CHARLES BOECKMAN PRESENTS JOHNNY NICKLE, recently released from Pro Se Productions, is the first volume in a fantastic, already popular new imprint from the cutting edge Publisher.   The imprint centers on characters created by classic Pulp Author Charles Boeckman in original stories beginningin the 1940s being written in new stories by some of today’s best authors.  CBP PRESENTS JOHNNY NICKLE contains tales by Richard White and Brad Mengel and focuses on a jazz musician with a penchant for getting into trouble and mystery around every corner.   Even more amazing than Boeckman’s wonderfully colorful characters is the fact that Johnny Nickle, as well as others, have their origins in a real musician.  Charles Boeckman himself.
A renaissance man in many ways, Boeckman is a self-taught man of many skills. He taught himself to play his horns, about music theory, to write, and about photography and darkroom work, as well as many other talents.  Knowing a great deal about music theory, Boeckman wrote all the arrangements for his own Jazz band. He used lead sheets. The real Dixie musicians didn’t need them, but he had them for all the instruments in case he had to get a substitute who needed them.
92 year old Boeckman literally wrote the book on Jazz.  “Cool, Hot and Blue’, published in 1968, is a history of Jazz aimed at young readers.  Another book by Boeckman, “And the Beat Goes On,’ has been used as a text book in universities.  He also wrote a novel, THE LAST JAZZ BAND, based on some wacky musicians he knew and played with on bands where he was a sideman before he started his own band..
Performing professionally since 1938, Boeckman is remembered as the founder of the 1970s tradition of Sunday evening Jazz marches down Starr Street in Corpus Christi.  According to Charles’ wife, Patti Boeckman, “As a matter of fact, at its height, the Dixie band played in a smoky dive (the perfect venue for Dixieland) in downtown Corpus Christi, and during the evening, the band played The Saints, marched out the door with customers following in a long line, marched to the end of the sidewalk and back, and then finished the tune back in the dive. After a few months, the police noticed what we were doing and said we needed to get a parade permit. So Charles went to police headquarters every week for the permit, until they finally told him not to bother anymore.”
Boeckman’s band, which Patty was a member of as a Bass player and a Charleston dancer, played in various locations in the area.  According to Patti, “The band played in some of the most prestigious locations in town, the Country Club, the Town Club (for rich folks), in church, etc. We did play other kinds of music. For example, we put on two gospel concerts. We also had two locally promoted concerts with our band and the Jim Cullum band from San Antonio, well known in jazz circles, in a battle of the bands contest.”
Charles Boeckman was awarded a star on the SOUTH TEXAS MUSIC WALK OF FAME in 2009.  This honor is the South Texas version of Hollywood’s Walk of Fame, but for musicians, recognizing those who were born in or have lived in Texas and who have made a lasting contribution to music in South Texas.  Boeckman received over 300 nominations for his Star.
Inductees include the likes of Selena, Kris Kristofferson, Freddy Fender, and more. The star is embedded in concrete in the courtyard of a complex called Water Street Marketplace in down town Corpus Christi.

CHARLES BOECKMAN PRESENTS JOHNNY NICKLE is available from Pro Se’s own store at  http://tinyurl.com/c52g4cc and at Amazon at http://tinyurl.com/cz6s2q3for $8.00!  Available for $2.99 for the Kindle at www.Amazon.com , the Nook at www.barnesandnoble.com, and in other formats at www.smashwords.com! 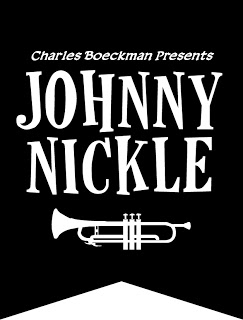