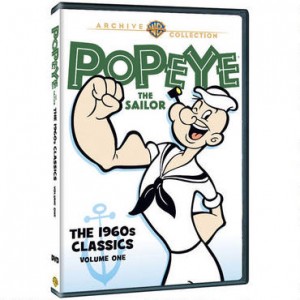 January 1929 was a very good month for comic strip readers. On the 7th they got to see the arrival of Tarzan and Buck Rogers while ten days later, fans of Thimble Theater met a brand new character named Popeye. The sailor was never intended to take over the strip but his popularity with readers encouraged E.C. Segar to keep him around until he finally shoved the Oyl family from the spotlight.

Burnishing his reputation were the brilliantly execute black and white theatrical shorts produced by Max and Dave Fleischer. After they shuttered operations, others took over the cartoon production, keeping Popeye a mainstay for generations of fans. Many of my generation were treated to the somewhat inferior Associated Artists Productions cartoons which completed their run in 1957. Not to be undone, King Features Syndicate hired Al Brodax to oversee a new round of cartoons aimed for the burgeoning television syndication market. He spread the order around to five different animation houses: Jack Kinney Productions, Rembrandt Films, Larry Harmon Productions, Halas and Batchelor, Paramount Cartoon Studios (formerly the Fleischers and Famous Studios), and Southern Star Entertainment. A whopping 220 cartoons were produced over a two year period, flooding the airwaves. Given the retention of the memorable theme song and vocal cast (Jack Mercer as Popeye, Mae Questel as Olive Oyl, and Jackson Beck as Brutus), young viewers were kept happy. 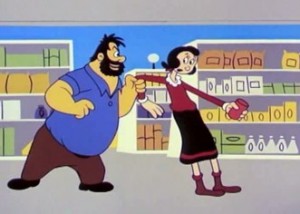 Bluto was renamed Brutus when KFS’ lawyers thought Paramount had copyright to the Bluto moniker because no one did their homework. Bluto first appeared in the strip, making him a KFS property.

Of these cartoons, with their simplified animation design and short running times, the ones from Paramount stood out as the most memorable so it’s nice to see 72 of them collected for the first time in Warner Archives’ just-released Popeye the Sailor: The 1960s Classics Volume One. Classics may be stretching the point, compared with their 1930s rivals, but the kid in me remembers many of these stories. I suspect these work because so many were taken from the comic strip, which was an imaginative serial. Sweetpea, Eugene the Jeep, the Sea Hag, King Blozo, Toar, and, Rough House, all turn up more than once.

We are treated to the standardized Popeye, the none-too-bright, kind-hearted sailor in his white uniform, the dim and fickle Olive in her red turtleneck and long black skirt. Bluto’s muscle mass became flabby fat and he ditched his sailor uniform for dark clothes.

The stories go from adventurous to silly, such as the time Popeye goes to elementary school but is ridiculed for his lack of knowledge (sorry, but a sailor has to be plenty smart to wear that uniform). Where the Fleischers added a dose of an animated verve to the action, the limited animation meant far more static storytelling. Each episode ends with a new set of lyrics to the theme music and Popeye in the same pose, a cost saving measure that only now grows tedious as one works through the six dozen toons.

Are all 220 worth collecting? Probably not, but this is a nice time capsule reminder of the simpler pleasures children’s television once offered. We were entertained, with little in the way of moralizing beyond good triumphs over evil and you need to eat your spinach.