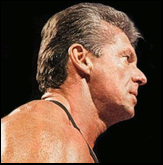 It’s been a few weeks since my pro-pro-wrestling tirade. With another pay-per-view about to hit the airwaves in a day, I figured I’d check in on my on-and-off-now-on again male soap opera. And just as I remembered it, here I sit with a head full of opinions and 1062 words to blather out into the interwebs in hopes one Vincent Kennedy McMahon stumbles upon it and makes sweeping changes to his on-air product I know he never will. But I’m getting ahead of myself.

For those uninitiated (but still here, considering that I’ve mentioned pro-wrestling in the intro, and somehow you weren’t instantly turned away), the smart marks of wrestling have long known the biography of Vinnie Mac. The studious entrepreneurial son of a small regional promoter, Vince grew up in the biz but longed for more than just bingo halls and the occasional stadium show.

After his father’s passing, Vince soon acquired more and more territories. In time, his WWF had laid waste to the independent circuits, giving birth to what would end up becoming the largest ‘sports entertainment’ promotion in the world. Per his worked-shoot (or for the laymen, a pre-approved scripted performance that appears to be off the cuff, drenched in 4th wall breaking commentary), Paul Heyman put it best: “…your father shook the hand of every promoter in this country (and said) that he’d never compete against them, that his son would never compete against them. And when your father died, you competed! And with your ruthless, merciless, take-no-prisoners attitude, you drove everybody out of business, didn’t you, Vince? You ran all the competition into the ground and you stole all their ideas and you made yourself a billionaire out of it!”

In short, Vince McMahon built an empire the way we assume Lex Luthor might. On the backs of the broken men he stepped on. And we the people lap up his product like the faithful slaves we are. But what else are we to do? The only other promotion with national distribution is TNA. And their roster, for better or worse, is comprised mostly of people who used to work for the WWE (nee WWF; they lost a lawsuit). I know that I should appreciate their shows more, but when I watch it, it reeks of why I end up tuning into Raw or Smackdown instead: the best production values, larger than life personalities, and every now and again… an amazing in-ring performance that can’t be topped. In their heyday competitors like WCW and ECW were able to match Vince through sheer will power and creativity. But Vince like all great moguls found ways to literally steal the ideas of those who could bump his ratings a notch, and become all the stronger.

When ECW redefined hardcore, and WCW turned Hulk Hogan into a venomous heel, Vince gave birth to the Attitude Era. He poached ECW’s star pupil Steve Austin. He created the Hell in a Cell match to push his very best punching bag – Mick Foley – into the forefront of extreme entertainment. And in due time, both promotions collapsed in a heap under Vince’s checkbook. Their rosters were absorbed, bleached, processed, and what little was left remained a now redubbed WWE Superstar. So WCW and ECW can join Milestone and Wildstorm in the graveyard of the creative. Meanwhile, Vince boldly went where no promoter had in the past: he became his own greatest star. Casting himself as both the evil genius and fool, the McMahon/Austin feuds of the late 90’s are what helped eventually destroy McMahon’s competition. Don’t believe me? It’s the actual story mode of the WWE ’13 video game.

I entitled this article “The Devil In Plain Sight” because I’m truly tickled by the fact that Vince McMahon’s power only continues to rise and ooze out from his Stamford, CT offices. How so you ask? I’ll cite my two favorite examples. The first, C.M. Punk. The Chicago King of the Indies was brought into the WWE and was immediately shoved towards the mid-card. In spite of being an astounding in-ring performer and solid promo-talker, Punk epitomized everything Vince loathed. A natural and fit physique untouched by recreational steroids, a plethora of tattoos, and an attitude that was built to mock authority. Yet, over time, as the crowds continually reacted positively to Punk’s performances, he slowly rose the ranks. I’ll spare you the lengthy diatribe: Punk won the title, threatened to quit, did a Heyman-esque worked shoot, and ended up holding the World Title for over a calendar year. It was an unheard of achievement. But then, as the devil is prone to do, Vince called in his contract. Punk lost the title to the Rock (a far more commercially viable champion), and was forced to lose to the Undertaker at this past Wrestlemania. Given everything he ever wanted, and then tossed back out with the bathwater. When Punk returns, can we still believe he is ‘the voice of the voiceless’?

And sadder still, begets the souls of those never even given the offer. Colt Cabana, C.M. Punk’s friend and Chicago compatriot, grew up a WWE fanatic. He attended wrestling school, and developed his character. He rose the ranks of the independent circuit, all while showing his entrepreneurial spirit. And then, with literally dozens of WWE wrestlers vouching for him, McMahon yielded to give young Cabana a developmental deal. Much like being handed a property like Voodoo in the New52, Cabana was given an uphill battle from the start. A few “squash matches”, and pretty soon Colt was told creative has nothing for you, and with it so too went his dreams. In the wake of this, Cabana doubled down. He started up a podcast and hit the independents harder than he ever had before. And here he continues to exist, lamenting on the life he never truly got a shot at. And when the topic comes up week after week… does Cabana say one ill word of the man who could still yet make his dreams come true? Nay.

Because the Devil is always there, and there’s always a price to pay.

Shortly after writing this article, Marc was offered a staff writer position at WWE. He sent in his résumé, and was promptly smashed in the head with a steel chair.