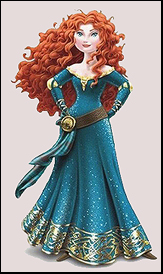 This has been a week of false starts for me. I read about something, get indignant, start to work up a righteous rage, and then find out that other people, just as angry, have made things better. It’s frustrating, but in a good way.

To use the example most dear to my heart, the folks who do the licensing at Disney wanted to add Merida, the main character in the Oscar-winning Brave to the line of incredibly profitable princesses in their stable. She would join Snow White, Cinderella, Belle, Ariel, and the like, starring in stories, direct-to-video movies, and on theme park merchandise.

Which is all well and good in its way. Little girls sometimes like to pretend to be princesses, and Merida is a better role model than most. She stayed her own person, dealt with her own relationships, and took her own chances, without any particular obsession with her looks, her femininity, or whether or not men liked her.

It was a story that resonated with millions of people of all ages and genders. It won the Academy Award. There was no reason to mess with something that worked so well.

Except, you know, she wasn’t attractive enough. Not to the people in charge. They made her waist smaller, smoothed out her hair, and changed her outfit to show more skin. They made her sexier, at least as they defined the term.

The outrage was swift and sure. A petition went up on www.Change.org almost immediately. I signed the petition on Sunday, and by Monday, there was word that Disney was going to cave to the pressure.

I like Snow White and Belle and Ariel et. al, and I don’t want them to be interchangeable. I like my characters to be unique, as human as the creative people can make them. I loved Merida’s story because she grappled with the tensions girls have with their mothers in a way that was funny and insightful.

She didn’t need to be conventionally sexy. She needed to be herself.

In a related story, Mike Jeffries, the genius in charge of Abercrombie and Fitch, really stepped in it. According to the story in the link, Jeffries invited larger people to shop elsewhere. He said, “Candidly, we go after the cool kids. We go after the attractive all-American kid with a great attitude and a lot of friends. A lot of people don’t belong [in our clothes], and they can’t belong. Are we exclusionary? Absolutely.’”

Jeffries got to be his age and status without realizing that the kids who are really cool don’t give a rat’s ass what he thinks about them or what they wear. More to the point, cool kids (and parents of kids not yet in the running to be cool or uncool) want to be considered on their whole selves, not just their size. The response was swift and sure. I doubt anyone with a brain (and the disposable income that goes with having a brain) is going to be shopping at A & F anytime soon.

It’s interesting that the outrage is over discrimination, sure, but also bullying. Statements like Jeffries divide the world and stack the deck against the lower castes. And it does so in a way that commercializes sexuality, making it another commodity for sale. Just like Disney did with Merida. We send far too many messages to our children that their only value is in their sexual attractiveness. It might sell product, but it’s not healthy, especially for kids under ten.

The people, united, will never be defeated. We’re on a roll here, folks. Let’s see what we can do about this particular travesty.