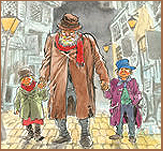 How many books and DVDs do you have on your Amazon wish list? How often do you remember to look at it? I always forget to check it, but I took a look at it today, and there are 100 items.

No, I am not soliciting here. My birthday isn’t for another six months, Chanukah and Christmas are too far off to think about, and I’m not your mother, so forget about Mother’s Day, which is this Sunday, btw – although there is Alix, whom I always alert to her mom’s new column. Big Hint, Alix!

I do have to delete some of the books and DVDs; I’ve ordered them without looking at my wish list because, well, I forget to check the damn thing, but there’s still a lot there. The oldest item was added on June 11, 2006; it’s Star Trek: The Next Generation – The Complete Third Season (DVD, not Blu-Ray. I don’t have a Blu-Ray player.) I have no idea why I’ve never ordered this, why it’s languished at the bottom – maybe because I watch BBC America’s repeats of TNG on Saturday late afternoons (which lead in to Doctor Who) – since that season of TNG, as Bob Greenberger so excellently reviewed on ComicMix, was the season where the show really found its legs, airing such classics as Sarak (a Vulcan disease comparable to Alzheimer’s is destroying Sarak’s mind), Yesterday’s Enterprise (in an alternate timeline, the Federation is losing a war with the Klingons and Tasha Yar is still alive), Sins of the Father (Worf accepts disgrace and discommendation to prevent a Klingon civil war – the start of an outstanding seasons-long exploration of Klingon culture that carried over to Deep Space Nine – and save the Empire), and of course the season finale, Best of Both Worlds: Part I (“Mr. Worf….fire!”) Also of note, at least to me, are Who Watches the Watchers, (a pre-warp, pre-industrial civilization discovers they are being watched by Federation anthropologists), The Enemy (Geordi and a Romulan are marooned on a harsh planet and must work together to survive), The Offspring (Data creates an android daughter), and Deja Q (Q becomes mortal and is still a pain in the ass).

Apparently I was busy browsing on June 11, 2006. I also added Fagin the Jew by Will Eisner. I know I picked this one because of my dual love for Eisner and for Charles Dickens’s Oliver Twist. According to Amazon’s description, Eisner first envisioned the book as an introduction to a graphic adaption of Twist, but “as he learned more about the history of Dickens-era Jewish life in London, Eisner uncovered intriguing material that led him to create this new work. In the course of his research, Eisner came to believe that Dickens had not intended to defame Jews in his famous depiction. By referring to Fagin as “the Jew” throughout the book, however, he had perpetuated the common prejudice; his fictional creation imbedded itself in the public’s imagination as the classic profile of a Jew. In his award-winning style, Eisner recasts the notorious villain as a complex and troubled antihero and gives him the opportunity to tell his tale in his own words.”

On that same day I also added Drums Along the Mohawk, starring Henry Fonda and Claudette Colbert (and directed by one of my all-time favorite directors, John Ford), When Worlds Collide, based on the book by Philip Wylie and Edwin Balmer, which I read years ago in my Introduction To Science Fiction class at Quinnipiac back when it was just a college and not a university – and talking about it now makes me want to reread it, so I’m going to add the book to my wish list, and Elizabeth I: The Virgin Queen, a 2005 Masterpiece Theatre mini-series, because of my passion for all things Tudor ( and yes, I already have The Tudors boxed set).

Moving forward, I kept up with my Tudor passion in 2011, adding a shitload of novels and non-fiction about that dynasty, including The King’s Pleasure, a novel about Katherine of Aragon (Henry’s first wife, she whom he dumped for Anne Boleyn) by the late and great British author Norah Lofts, and two histories by another Brit, famed historian and author Allison Weir: The Lady in the Tower: The Fall of Anne Boleyn and Henry VII: The King and His Court. I also listed Confessions of a Prairie Bitch: How I Survived Nellie Oleson and Learned to Love Being Hated by Alison Armgrin, Prairie Tales: A Memoir by Melissa Gilbert, and The Way I See It: A Look Back at My Life on Little House by Melissa Sue Anderson just because I always loved Little House on the Prairie. C’mon, who didn’t?

In November 2011 I added William Shatner’s Up Till Now: The Autobiography. Bill, I love ya!

2012 additions include Among Others, by Jo Walton. The Hugo and Nebula Award winner for that year is a brilliant coming-of-age story that mixes young adult literature, magic, and science fiction into a read for all ages. I also found Redshirts: A Novel with Three Codas, by John Scalzi (which was reviewed by ComicMix’s John Ostrander), a spin on the classic Star Trek’s law that new ensigns, i.e., red shirts, always get killed on away missions.

Being a fan of Mary Doria Russell’s The Sparrow and its sequel Children of God, I also added Doc, Russell’s take on Doc Holliday, Wyatt Earp, and the events that occurred at the O.K. Corral. And I really must move up to the top of the list Alice Hoffman’s The Dovekeepers, the story of four women who are among the 900 Jews holding out against the superior Roman army at the siege of Masada, the mountaintop fortress in the Judean desert.

It’s been a tough time for me since last Christmas, when my father first became ill, and watching my mother slowly slipping into elderly dementia. My life has become a cacophony personal and professional turmoil, a symphony of wishes and “if onlies”; I lie in bed at night unable to sleep, with all the different “roads less travelled” in my life teasing me with alternate possibilities, alternate lives. I am adrift at sea, questioning my choices and wondering, no, all too often, fearing the future.

If wishes were horses, the beggars would ride.