New Who Review – Journey to the Centre of the TARDIS 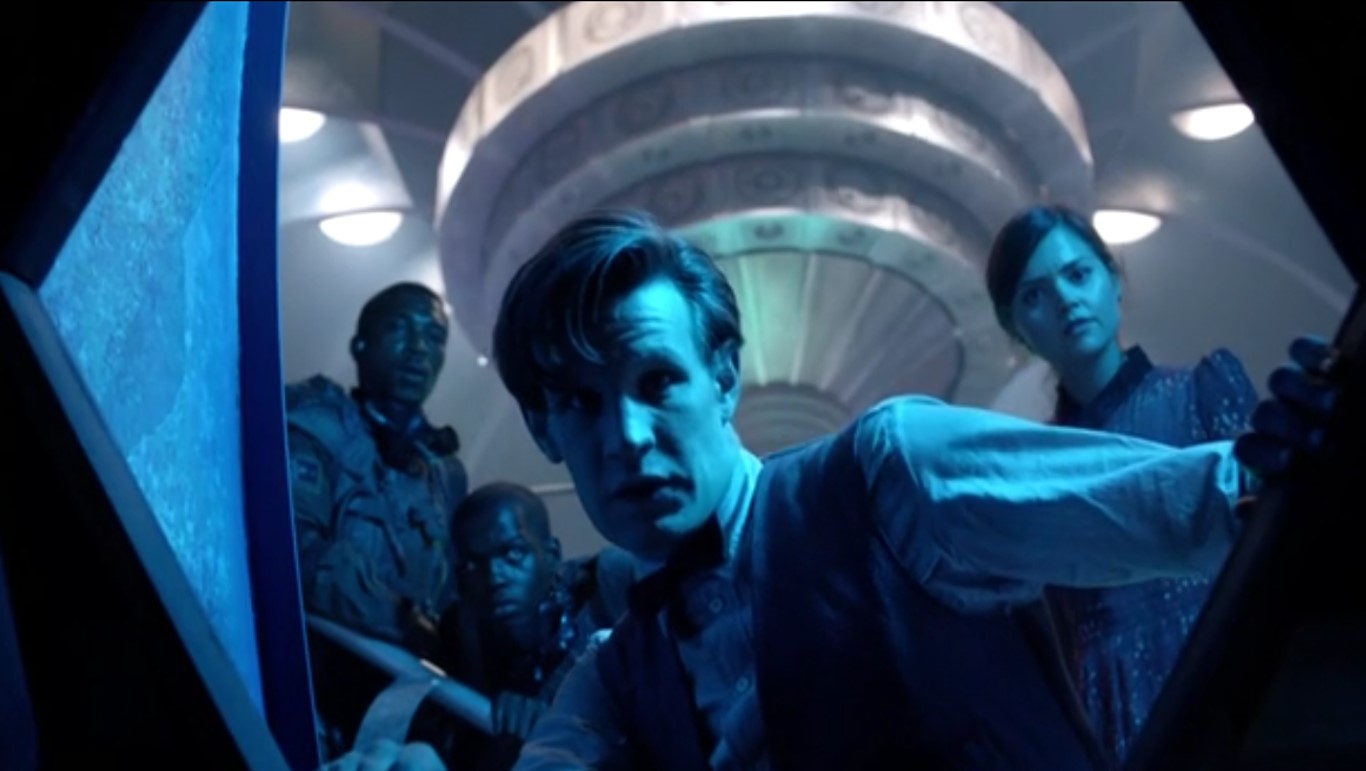 She’s the only character on the show to appear in almost every episode.  She’s the TARDIS and she’s as important to the series as The Doctor himself.  So it’s nice when we get a story that features her  in a major way.

Trying to get Clara and the TARDIS to get along,  The Doctor tries letting her fly the ship, shutting off some of the higher more complex functions…like the shields.  This exposes the ship to outside detection, and detected it gets, but space salvage collectors the Van Baalen Brothers.  Using an illegal magna-grab system, they grab the TARDIS, causing a massive overload in the ship, one that flings The Doctor out of the doors, and Clara rolling back deep into its corridors.  The Doctor is forced to engage the brothers to help him save Clara, and later, keep the TARDIS from exploding and destroying much of the universe.

The main threat of the episode is effectively a condensed version of the arc plot from Matt Smith’s first series – the destruction of the TARDIS causing a rift in time, and held in stasis by the TARDIS itself.  Even the solution – the Doctor telling himself what to do to fix it has been done in Moffat’s two-part short for Comic Relief Time and Space, and to a more in your face level, the earlier special Time Crash.

THE MONSTER FILES – The TARDIS is both the setting and primary antagonist of the episode, trying to keep itself safe as well as keep the Van Baalen Brothers powerless.  There have been a number of TARDIS-centric episodes of the series, in an attempt to give some glimpse into its workings. The Edge of Destruction was way back in the first series, and was the first opportunity to both open up the backstory of the show, and the first time it was suggested that the TARDIS was at least some form of sentience – it tries to warn the crew that it was heading back to the beginning of time. We got a mini-tour of the ship in The Masque of Mandragora in which we first see the second control room, and a very large boot cupboard.  The Invasion of Time promised a deep look inside the TARDIS as The Doctor must face invading Sontarans- alas, a strike meant that the planned TARDIS sets were never built, leaving them to film in a disused hospital. We saw sevela new rooms, including a wardrobe and the Zero Room in Castrovalva.  Neil Gaiman’s previous episode The Doctor’s Wife showed a lot of the interior of the ship, as well as a major insight into her character. One of the downloadable video games, simply titled TARDIS, gave a look at many of the rooms in the ship as well,

Steven Thompson (Writer) has admitted in interviews that he has a handful of dream episode he planned to pitch for the show, including a way to bring back the Krynoids from The Seeds of Doom. Moffat pithced this story to him, he decided it was a much better idea, and went off to write it. Thompson  has written three episodes of Sherlock, last coming over to Doctor Who for The Curse of the Black Spot.

A WHOLE LOT OF RUNNING – Last seen in the aforementioned The Doctor’s Wife, we get another iteration of the classic “endless corridor” gag in this episode.  Doctor Who is notorious for this set-up – a simple set of two or three corridors, set at an angle to each other, and with a bit of careful cinematography, you can make them look like an endless set of twists and turns.  At least a couple of these corridors were built right along with the new set – we see The Doctor head down one to look for his the garage in The Bells of Saint John.  In the case of The Doctor’s Wife, the corridors were built expressly for the episode.  They also knew the episode was coming, so they left the Tennant control room set standing expressly for its use.…AND A ROOM AND A ROOM – We get a fleeting look at the swimming pool (last seen in Invasion of Time), the library (and a VERY interesting book), and what looks like an observatory.  The Telescope within is very reminiscent to the light collection weapon from Tooth and Claw.  It’s likely that it’s just a quick re-use of the model by the special effects team as opposed to it being the actual device from that episode.WE NEVER THROW ANYTHING AWAY – In that storage room Clara enters we see The Doctor’s (and River’s) crib, one of Amy’s hand-crafted TARDIS toys, a magnifying glass used (among other times) by Donna Noble in The Unicorn and the Wasp, and an umbrella that many presume is Victorian Clara’s from The Snowmen, it actually more closely resembles the umbrella carried by the eighth Doctor in Paradise Towers. VOICES FROM THE PAST – As Bram starts to dismantle the console, we hear voices from past adventures, including Susan, The Third, Fourth, Ninth and Eleventh Doctors, a couple of the Companions, and finally Five, complaining that Ten had “changed the desktop settings”.  Susan was allegedly the one to name the TARDIS, but in later adventures the name seems to be an official one.  Pertwee was the first to use the term “dimensionally transcendental”, techspeak for “bigger on the inside.  Baker’s line is from the single best explanation of  dimensional mechanics ever, given to Leela in Robots of Death.

“Basic mode? What, because I’m a girl?” – Well, The Doctor tried to teach Rose to fly the ship once, tho just as practice, and if she’d been actually been doing it, she’d have killed them both.  So for The Doctor to actually let Clara try flying the ship at all if quite a gesture of trust.  Glad it went so well.

“Well put – ‘Whoa’ and “awesome’.” – The Doctor describes the TARDIS as “infinite” – likely he’s either just engaging in hyperbole to make a point, or he’s referring to it being infinitely configurable.

“So that’s who…” – The mystery of The Doctor’s name has been a running theme for most of the current run of the show, and has become a major plot thread since the end of last season, supposedly culminating in the last episode of this series, The Name of the Doctor.  Theories have flown thick and fast as to the secret – is he hiding an act of evil in his past, or is he simply keeping it a secret so he can’t be traced back to his youth and destroyed?  In many cultures, knowing an enemy’s true name is the key to controlling or destroying them.

“The Eye of Harmony – exploding star in the act of becoming a black hole” – Mentioned just last week, the Eye of Harmony was first mentioned in The Deadly Assassin as the primary power source of the Time Lords.  Initially described as an actual black hole, here tweaked to be one in the act of a-borning.  Also, while initially described as being buried under the council chamber of Gallifrey, here we see the Eye is within, or at least accessible from, the interior of the TARDIS.

Many have expressed regret that all of the events have been forgotten by The Doctor’s companion and the Van Baalen brothers, to which I retort, exactly how much have been forgotten?  Gregor doesn’t remember the events of the adventure, but certainly recalls his shred of decency, resulting in him treating tricky with more…humanity.  And Clara says she doesn’t want to forget “all” of what’s happened.  She’s traveled in time enough that she’s potentially able to keep events erased from time in her mind, as The Doctor tries to do with Amy about Rory at the end of Cold Blood.

“What are you? A trick? A trap?” – For two weeks running we get validation that there’s nothing special about Clara, save for being a strong feisty girl.  Here she gets told about her other iterations, and doesn’t know a thing about them.  But again, it’s not known how much of this revelation she’ll remember.

NEXT TIME ON DOCTOR WHO – Mark Gatiss, Diana Rigg, Strax, Jenny and Madame Vastra.  The Crimson Horror, one weekend hence.