Maybe You Can Hire The Suicide Squad! 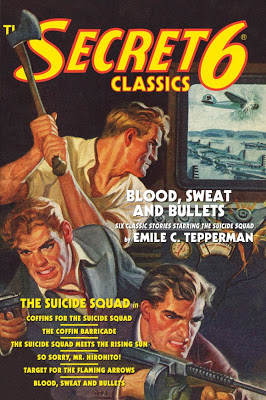 Altus Press has announced the release of The Secret 6 Classics: Blood, Sweat and Bullets by Emile C. Tepperman.

Another day, another new release!

Coffins for the Suicide Squad: Boldly, New York’s crime czar flung bis challenge before the F.B.I., daring the full might of America’s prize crime-fighting machine to a finish war! And Washington answered with the Suicide Squad—three grinning, fighting Volunteers of Death—to tame a murder empire!

The Coffin Barricade: Eight young special agents went out to get the Undertaker, unknown Czar of the Corpse Bazaar. Eight came hack—in caskets and embalmed! So the Chief sent out the Suicide Squad—Murdoch, Kerrigan and Klaw. He figured they’d lived close enough to Death to be able to find the Undertaker—and put him six feet under!

The Suicide Squad Meets the Rising Sun: We are all engaged in the defense of our great nation. But, in one of the most amazing chapters of this war, it became the grim task of Kerrigan, Murdoch and Klaw, three lone champions of democracy, to find and destroy a Japanese Army of nine thousand brutal fanatics—who were hidden here in the United States!

So Sorry, Mr. Hirohito!: Kerrigan, Murdoch and Klaw, the famed Suicide Squad, had always fought side to side, welcoming any odds. But on that nightmare night in Valparaiso, Johnny Kerrigan stood alone against the Jap horde, while Steve Klaw went to wrest the great ship-building works from the Axis—with a thirteen-year-old girl as his only ally!

Blood, Sweat and Bullets: The Ox had America neatly packaged to deliver to Hitler on Christmas morning. And, with only five shopping days left to Christmas, Kerrigan and Murdoch bartered their partner’s life as the price of her freedom. But Steve Klaw found that he had to chase death three thousand miles to seal his bargain—while Kerrigan and Murdoch were helpless save to rush him to his doom!