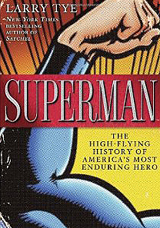 Larry Tye’s book was on the living room shelf for a month or more before I got around to reading it last week, and I’m not exactly sure why. I‘ve spent time with Larry and never doubted that he’d do good work, and he was kind enough to mention me in his biography, Superman: The High-Flying History of America’s Most Enduring Hero.  But whatever the reason for my tardiness, I’ll mark it “happy” because when I did finally delve into the book, it happened to be during Superman’s 75th birthday week. (Note to casual fans: the Man of Steel’s debut was on April 18th, 1938.)

And here it was, the whole story: the early lives of Superman’s creators, a couple of Jewish kids from Cleveland named Jerry Siegel and Joe Shuster; their attempts to sell their brainchild as a comic strip before they finally placed it at a comic book publisher that later became, and remains, DC Comics; the instant success, and then the deluge – radio shows, movies, novels, early television, recent television, trading cards, cereal boxes, animation, lunch boxes, Halloween costumes and everything I’m forgetting to mention. Larry Tye covers it all with a skillful combination of contemporary reporting and historicity.

The story isn’t always pretty. It has its share of sleaze. The most familiar scandal concerns the death of television’s first Man of Steel, George Reeves, found shot to death in his Hollywood bedroom with a gun at his feet. Suicide? Maybe. But there are doubts. That was the ugliness that made the papers, was the subject of other books, and was even the basis for a movie starring Ben Affleck.

The rest of the dubious behavior wasn’t as sensational – no slain actors – and mostly happened behind doors and walls.

I was around for some of it – that is, I was working for DC and even wrote the flagship Superman title for a year. Being close to the hub of big-time comics (though not very close) I must have heard rumors, and I did have a rough notion of the tribulations of Superman’s creators, and hey, I’m not immune to gossip, but I guess I wasn’t more than casually interested. I walked past those doors and walls, but I was never invited inside, and might not have cared to be. I mean, wouldn’t they have wanted me to wear a tie?

Good or bad, my ignorance? I don’t know. I can’t see how getting the inside dirt would have enhanced my scripts.

Would it have lessened them – maybe provide a distraction from the tasks at hand? Again, I don’t know. Never will, and don’t have to. But the information itself? That I’m glad to have, and I’m grateful to Larry Tye for providing it.