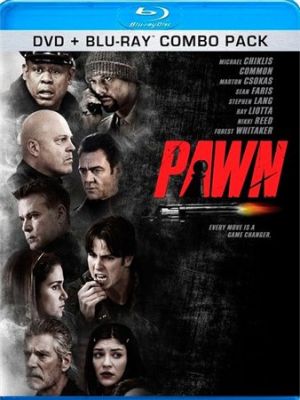 These days, budgets can be pared down thanks to digital photography, letting producers focus more on cast and story, which often means we get some interesting takes on the standard genres. For example, a bungled robbery has been done time and again. But in the newly released Pawn, out today from Anchor Bay, we get an interesting set of characters.

A small group of would-be thieves hit a diner and are frustrated by discovering a dummy safe and decide to wait. Bit by bit, we learn more about the characters as the hours tick down to midnight when the time-locked safe, containing the diner’s cash, will open. We’re given some interesting narrative structure added by superb performances by a familiar cast led by Michael Chiklis. Chiklis is “The Brit”, who leads the gang and largely interacts with the diner’s owner

(Stephen Lang). They banter, the tension rises and falls as the minutes pass and some interesting, plausible complications arise, starting with the unexpected arrival of a cop (Forest Whitaker).  Then there’s poor Nick (Sean Faris), an ex-con who was in the bathroom when the robbery began and worries the cop will suspect he’s part of the gang. Instead, when things go south and this becomes a hostage situation, the poor guy becomes the go-between when the police negotiator (Common) arrives.

Screenwriter Jay Anthony White is a newcomer, having previously written only shorts so this 88-minute story is his longest outing yet and shows promise. There are a few pacing issues but he creates interesting characters and has a nice way with dialogue. The key here is the structure as thigns escalate and truths are doled out, keeping your interest.  He’s helped here by cinematographer turned director David A. Armstrong, who knows a thing or two about rising tension given his work on the Saw series of films. This shows both men having promising futures as Armstrong gets nice, measured performances from Chiklis and Ray Liotta while letting this be Faris’ showcase. Chiklis has usually played the bad ass good guy, but here he wields his shotgun with authority as the real bad guy.

This is a pleasurable way to pass some time and is worth a look. The direct-to-DVD feature transfers nicely to high definition and is accompanied by a single bonus feature: Pawn: Behind the Scenes (23:09), which gives you the basic behind the scenes information.

The combo set includes the Blu-ray and a DVD edition of the film.