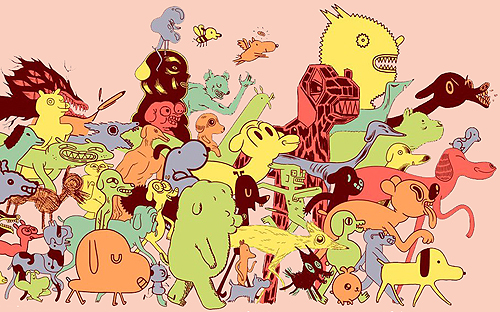 Well, it’s convention season once again. This statement doesn’t mean as much as it used to, when there actually was a convention “season.” Now it pretty much runs from the beginning of spring (Glenn was at WonderCon and will be posting his pictures sometime before next year’s show) and ends the following March at San Francisco’s MegaCon… give or take.

My schedule includes Chicago’s C2E2 next week, maybe Heroes in Charlotte in June, San Diego in hell, Baltimore in August and New York in October, held each year at the only spot in all Manhattan that is inaccessible to humanity. For me, it started last week at one of my favorites, New York’s Museum of Comics and Cartoon Art, a.k.a. MoCCA Fest.

Being in our back yard, ComicMix was well represented: Vinnie Bartilucci, Glenn Hauman, Adriane Nash, and Mike and Kai Raub. Traditionally, Martha Thomases is in attendance but this year the she was in Japan at the time and the commute would have been a bitch.

I enjoy MoCCA because there it covers the widest spectrum of self-published, small-published, and web-published “independent” comics. If your thrills are limited to capes and masks from the Big Two, this event would either bore you… or transform you, opening your eyes to all sorts of really interesting stuff people do with our coveted medium. So if you’re into comics, it’s certainly worth a try.

If you could bottle the enthusiasm in the room, you’d have enough energy to replace Chernobyl. By and large, these people aren’t getting rich, although some make a living and others would like to eventually. They’re there out of their love for the comics art medium and to employ our unique storytelling concepts to communicate their stories. Each time I’m there, and I think I’ve been to eight or nine of their shows, I come away renewed and rejuvenated. So up yours, Ras Al Ghul.

Despite the quantity of behatted hipsters, this isn’t necessarily a young person’s show. Fantagraphics, perhaps the leading bookstore publisher of these sorts of efforts, was well-represented, as was Abrams and other staid outfits. While trying not to be overly creepy in my contacts with the younger folk, I also hung out with fellow geriatrics including Craig Yoe, Denis Kitchen, J.J. Sedelmaier, and Paul Levitz.

It comes as absolutely no surprise that of all the shows I attend, MoCCA routinely attracts more women per capita. Well, having made that statement I might have just put the kibosh on that, so let me say there isn’t as much semi-naked cosplay as I see at capes shows. I suspect that this is because the show is all about your desire to express yourself and tell your own story and not so much about who was the Avenger villain who crossed over into Amazing Spider-Man #214. (No, no; don’t Google that – I pulled it out of my ass.)

A high-point was when Vinnie, Glenn, Adriane, Mike, Kai and I semi-inadvertently all wound up at the Popeye’s Fried Chicken across from the venue. There was a point when ComicMix had actually taken over the joint. I’m glad to say that we didn’t spontaneously burst out in rousing song – MoCCA isn’t a science-fiction convention.

As it turns out, this column is sort of a crossover. My friend and fellow columnist Denny O’Neil was also there, and he will be waxing poetic about his MoCCA experience tomorrow, same-Bat-Time, same-Bat-Channel.