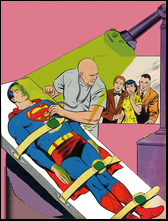 Last week’s column didn’t happen because I received a phone call at about 10 A.M. last Sunday from my mom. My dad was having another “episode,” his third. Meaning his brain was short-circuiting once more. It’s called “complex partial seizure disorder,” for the medically less-literate out there.

No one really knows why this is happening to him; before this started last Christmas Eve, he was in remarkable health for a man of 90. The only drug he took on a regular basis was one of the statins –anti-cholesterol drugs – and that was on a preventative basis. His blood pressure runs about 110/70, his heart rate about 65; his only major medical problem has been the deterioration of his eyesight because of macular degeneration and he was responding remarkably well to the treatment. Yes, he had had prostate cancer, but that was 30 years ago, and when his Prostate Specific Antigen (PSA) level rose, he started the androgen deprivation therapy and it dropped to 0.003 or something, i.e., normal.

So this week once again my dad lay in a bed in the ICU at Cooper University Hospital – big kudos to the staff there!!! – only this time he was intubated because the ambulance didn’t take my mom with them and I was driving like a bat out of hell down the NJ Turnpike and my brother (an MD at “the Coop”) was vacationing on Puerto Rico so there was no one to tell the trauma team that my dad is DNR and the protocol when a patient comes in having seizures is to intubate to ensure a patent airway.

Yesterday, exactly one week later, Dad woke up again. He was extubated this morning. He’s very weak, but he knew where he was, and he knew all of us. He also ate ice chips, a cup of Haagen-Dazs vanilla ice cream, Jello, and a ¾ of a bowl of chicken broth. The plan is to get him out of bed tomorrow. We’re going to take it from there.

So driving home I thought about my dad and this column and I thought about the portrayal of infirmity and illness in the super hero world. I had plenty of time because I again got stuck driving north on the Turnpike between Exit 7 and Exit 8A – a stretch of about 21 miles – in bumper-to-bumper, crawling traffic. It’s a section of the iconic NJ Turnpike that has been undergoing reconstruction for the last three years or so, which makes it prone for Delays Ahead: Be Prepared To Stop alerts, and I swear I think people slam on their brakes just to read the signs. What is it about one fender-bender that causes miles and miles of back-up?

The first picture in my mind was of Silver Age Superman gasping and choking and weakened as the radiation from Kryptonite, usually held or manipulated by Lex Luthor – poisoned him, finally turning him as green as the Wicked Witch of the West, indicating that death was near, just in a few panels. Kryptonite worked fast, unlike what happens to ordinary humans when exposed to radiation. Ordinary humans, exposed to radiation, don’t even feel it at first. The amount of time between exposure and the first signs and symptoms depends on the amount of radiation that has been absorbed. The first thing that usually happens is nausea and vomiting; headache and fever can also occur. After that, an individual with radiation sickness can have a period of remission, in which there is no apparent illness and the individual feels fine. Then the more serious problems start: hair loss, weakness, dizziness, bloody stools and vomit, weight loss, low blood pressure, fucked-up blood counts, cancer….a slow, painful, and debilitating death.

I guess Superman puking and having bloody diarrhea and going bald, getting infections and cancer and dying a slow, painful, and debilitating death wouldn’t have gotten past the Comic Code Authority back in the day.

Barbara Gordon, a.k.a. Batgirl, shot by the Joker in Alan Moore’s The Killing Joke (1988), was paralyzed and confined to a wheelchair – but through the talents of ComicMix’s own John Ostrander and his late, wonderful wife, Kim Yale, we watched Barbara go forward with her life: although initially (and realistically) portrayed with a reactive depression, Barbara comes to see that her life is not over. Gifted with a genius level IQ, a photographic memory, and possessing expert computer skills (including hacking) along with graduate training in library sciences, Barbara transforms herself in Oracle, an “information broker” to law enforcement agencies and the super-hero community. She also hires Richard Dragon (co-created by ComicMix’s own Denny O’Neil), a martial artist, to teach her combat and self-defense skills.

Gail Simone took the ball that John and Kim handed her and ran with it in Birds Of Prey…until, after DC’s 52 reboot, Oracle never existed and Barbara was mysteriously back on her feet. This – rightfully, im-not-so-ho – pissed off a lot of fans, because Barbara Gordon as Oracle was the preeminent role model for those living with disabilities. However, Gail has done a magnificent job with the post-Oracle Batgirl, allowing the character to go through PTSD secondary to her disability and recovery – although, as we all know, DC seemed to have a problem with that a few months ago. Luckily, DC recovered from that particular illness.

And now Power Girl, a.k.a. Kara Zor-L, a.k.a. Karen Starr, has breast cancer. Although I’m sure the intentions of the creative team are good and positive and totally above-board (and I do hope none of the creative team has had any kind of personal experience with breast cancer), somehow the cynic in me is smirking. Maybe because Power Girl has always been drawn with gi-normous bubble boobs that burst out of her costume like Mt. St. Helens blowing their tops? It’s like Sharon Tate’s character in The Valley Of The Dolls getting breast cancer. (Google or read the book or stream/rent the movie to get the reference.) It’s saying that the one thing that lifts (pun intended) Power Girl out of the crowd of super heroines are her mammary glands, so let’s mess with those.

It would have been more interesting to me if Sue Storm got breast cancer, or Lois Lane (isn’t she dead?), or even Wonder Woman.

Or what if Reed Richards, or Johnny Storm, or Bruce Wayne, or Hal Jordan, got breast cancer? Men get breast cancer, too, you know. More and more frequently, by the way.

I just hope the creative team does it research. And not just solve the problem of “how do we treat a woman who has breast cancer if she’s indestructible?”