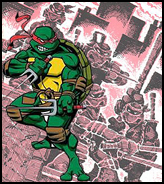 As a license, I have the utmost respect for the Teenage Mutant Ninja Turtles. Since its comic debut in 1984, the property has been spun off into numerous animated incarnations, several movie franchises (both old and yet-to-come), and a bevy of merchandise unheard of unless you count Star Wars. And I have to give props where props are due: the IP as a whole has never been better. That being said? It could all go downhill very quickly. But I’ll get to that in a bit.

Let’s start at the top. Top of what I don’t know exactly. Let’s say comic books! IDW as of late has been deluging the market with TMNT titles. Ongoings, mini-series, epic crossovers, you name it. And while I’m sad to report that in my tenure as a fan I have yet to actually crack open a volume myself, it comes with great authority (a few of my good friends) that they are doing the characters justice. I will no doubt be jumping into the main book myself with issue #21. Per Comic Book Resources interview with Turtles’ Co-Creator Kevin Eastman, I was drawn into his description of bringing a level of reality (seriously) to the book with the titular teens having to learn new skills.

In so many words, Eastman was quick to note that the Turtles have generally been “ninja masters” and his intent is to remind us that the martial arts are an art form and artists never stop learning. It’s that kind of dedication in concept that sounds legitimately cool to me. Certainly cool enough to elicit a purchase once a month for the foreseeable future.

And what about the boob tube? Well, I’m happy to report that the current product being offered is now (thanks in large part to the CW canning Green Lantern TAS and Young Justice, grumble grumble), Nickelodeon’s relaunch of TMNT, is one of the best cartoons being offered today. won me over in less than a handful of episodes. The team behind it should be commended.

For many folks who don’t “get it,” the Turtles on the surface are merely a weapon and general personality trait. But the Bick show is smart to use those bullet points as inspirations. In the season that I’ve watched thus far, I’ve seen numerous attempts to flesh out each Turtle as an individual. Combine this with smart updates to many TMNT mainstays (Leatherhead, the Kraang, Shredder, etc.), and you get a cartoon that deftly plays to me as an adult while obviously targeting a whole new generation of kids. Compared to the hyper-Japanese-terribly-ported crap I’d seen trading spots with Spongebob? It’s a breath of fresh sewer air to me.

Now this of course brings us around the scary bend, that, of course, being the 600 pound explosive elephant in the room, Michael Bay. From the first utterances of news about his desire to create another abomination out of my childhood pleasures, so was I joined by other shellheads in our trepidation. Bay’s Transformers sits in my mind as one of the worst examples of modern merchandise-driven cinema. And let me be clear: I don’t mind for a second that some movies are built for action figures and bedsheets. But Bay’s adaptation was kinetic to the point of nausea, and riddled with near-racist portrayals of shallow predictable characters. And for whatever reason? It had pot-humor, John Tutoro in an increasingly baffling performance, and more military porn than my copy of Stars, Stripes, and Tits 2: Cannons Ho.

It’s these factors that weigh heavy on our minds. Especially given what little news seems to dribble out from the babbling brook of Bay. The Turtles will be from space? Megan Fox will be April O’Neil? And the title will just be Ninja Turtles? Suffice to say, with all that’s being done right with the brand, it might just take one explosion-riddled movie flop to ruin it all. Follow me on this:

The Green Lantern movie sucked and toy departments got stuck with tons of stuff that didn’t sell. Green Lantern The Animated Series was canned, due in large part to the lack of merchandise sales. Now, if Ninja Turtles tanks, it could take with it the whole property. Obviously the current Nickelodeon cartoon and comic are going to be well into their sophomore years when the Bay feature hits. But nothing like a bad day at the matinee to curb a kid’s appetite for their favorite amphibians. How do I know? Because I gave up on the cartoon when TMNT 3 hit the multiplex. And it took 10+ years for me to forgive them.

Until Bay blows up my childhood again, I’ll be happy to enjoy my new found love of Leonardo, my rapture for Raphael, my doe-eyes for Donatello, and my mania over Michaelangelo. With a potent toon on the tube, and a comic in my buy pile… it’s a good day to be a Turtle.