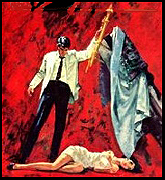 …if he is a man of honor in one thing, he is that in all things

The quote above is from Raymond Chandler’s superb essay, The Simple Art of Murder. If you’ve never read it, do yourself a huge favor and do so, right now. Google the title and read Chandler’s prose and then come back to me. I’ll wait.

Hi. You’ve finished reading Chandler and here you are, and yes, you owe me one.

But now I want to bollix the discourse by disagreeing with Chandler. I agree with almost everything Chandler writes in the essay – almost, but not all. “...if he is a man of honor in one thing, he is that in all things”? Um, no. But it’s a qualified no. If we’re discussing a fictional man, then okay, let Chandler’s claim stand. I think most writers and critics and teachers would agree that consistent behavior is a constant – in fiction. But does it apply to real life? Maybe not. The engines that run we noble humans are deep and complicated, and the rules they follow, if any, aren’t easily visible. Ol’ Charlie there, he can be a Fearless Fosdick in one situation and a whimpering poltroon in another and does even Charlie know why?

The event in which I participated last week might prompt these musings. It was held in SoHo, my old stomping grounds, and it ostensibly celebrated…well, maybe “celebrated” isn’t the right word: Let’s say that the event recognized the 148th birthday of Dr. Fredric Wertham, author of Seduction of the Innocent and big kahuna among the witch hunters of the early 1950s. His book, and the congressional hearings of Senator Estes Kefauver, with the approval of a sub-posse of clergy and editorialists, decimated the comic book business, put hundreds of decent citizens out of work and, arguably, lamed an art form.

We comic book guys have tended to demonize Wertham for sixty-plus years. But last week’s give-and-take yielded information about Wertham that may have been new to many in the room. He fought for public school integration. He provided psychiatric care for residents of Harlem for a quarter a session, or a dime. He seemed to be a decent and useful professional. Until he wandered into comic book land.

Carol Tilley, a librarian at the University of Illinois, was one of my co-panelists in SoHo. Ms Tilley performed the useful, and much overdue, task of actually digging into Wertham’s papers. She discovered that Wertham faked much of the “research” he used to bolster his accusations. So…this successful and respected and charitable man of science cooked the books. A couple of columns ago, I speculated on his possible motives and reached no conclusion, and although the SoHo event was interesting and informative, no conclusion was reached there, either.

We can call Dr. Fredric Wertham a man of honor. He just wasn’t a consistent one. Maybe he should have been fictional.