Disney Is Watching Your Skin 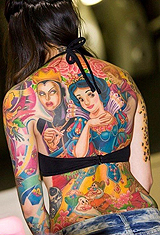 When we started hearing rumors and reports from WonderCon this weekend, we thought we knew what the story was going to be: Disney/Marvel was following in the footsteps of Warner Bros/DC Comics and going after tattooed fans in an attempt to get a piece of the still-growing body modification dollar.

Yes, this morning we had the unveiling of the officially licensed tattoo flash with sheets featuring Disney, Marvel and Star Wars characters.

But that’s not the story here. The real story is what happened when corporate executives approached attendees at the Anaheim California Convention Center and what occurred at area tattoo shops.

Unlike the cease-and-desist letters fans received from Warner Bros/DC two years ago, Disney (which now includes their Marvel and LucasFilm divisions) has taken a wholly different tack with fans. “I guess they don’t want the pics from spring break of that guy doing body shots off of me up on Facebook” said one female fan whose right arm has a huge Dark Phoenix tattoo.

“We feel that fans are acting as ‘brand ambassadors’ when they sport tattoos of our characters, and as such have a responsibility to maintain our company’s image, as well as that of our properties’. Therefore we are asking our “inked” fans and devotees to please take care and be mindful of behavior that may be deemed improper,” is how the opening statement of the packets handed out to attendees with the applicable visible ink.

They go on to outline what basically amounts to a morality clause, asking that tattoos be covered up if the wearer insists on participating in objectionable or questionable acts. And Disney “insists upon curtailing the posting of any images to social media outlets where our property is visible while such actions as drug abuse, alcohol use, smoking, or illegal activities are taking place, as well as usage in any nudity or sexually explicit content whatsoever.” Disney states the cease-and-desist letters will be issued should these requests not be fulfilled, adding a bunch of legalese that boils down to threats of copyright infringement lawsuits. 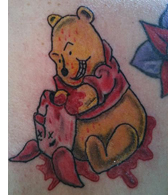 Ah, yes. Copyright Infringements. Because Disney wants to control the images of their characters in the literal sense too. “They asked me where I’d gotten my work done,” WonderCon attendee Sean Law told ComicMix. “They were really interested in it – and really unhappy about it” he laughed, then showed us his tattoo of a maniacal Winnie the Pooh holding Piglet’s bloody head rather than a honeypot.

The Orange County tattoo artist who did Law’s tattoo, as well as artists at dozens of other area shops, received visits from lawyers this morning. Law’s artist was told he had violated Disney’s copyrights by doing the piece. “They objected to both the image and the execution, dude said it wasn’t ‘on model.’ Can you believe that?

“Then he handed me a style guide!”