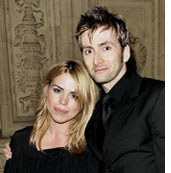 Announced just hours before the series premiere this evening, the BBC confirmed the first casting information for the Doctor Who 50th anniversary special, and they started big.  David Tennant will make his return to the series, as will Billie Piper, reprising her role as Rose.

Tennant’s Doctor regenerated into Matt Smith on January 1, 2010; Billie was last seen in a cameo as Rose on the same adventure.  Rose left the Doctor two years previous, on “Pete’s World” a parallel Earth, in the company of a human clone of The Doctor, created as a result of the fight with the Daleks in The Stolen Planet / Journey’s End.  At this point, there’s no definite verification whether Tennant will return as The (original) Doctor or his Pete’s World clone.

Also announced as a member of the cast is John Hurt, British acting icon with quite a long resume in genre work, including Merlin, V For Vendetta, Elephant Man, Harry Potter, and 1984.

Tennant and Piper have spent much of the past months denying vehemently and whimsically their appearance in the series. David reported in a recent appearance on The Graham Norton Show that a representative arrived backstage to remind him not to talk about the special, “…and I don’t even know anything!”

Other actors associated with the show have been equally reticent about their appearance, and the few that have dropped tidbits have been rapped on the proverbial knuckles.  John Barrowman (Captain Jack Harkness) announced that he was “talking” to the BBC to appear, only to have to retract that comment, followed by a tweet some weeks later stating definitively that he would not be appearing.

Filming for the new special begins this week, directed by Nick Hurran and written by Steven Moffat.  Odds are that news of additional casting will filter out over the next weeks, either officially or via the hordes of fans which will certainly descend on each location shoot.