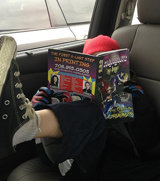 A week ago today, Unshaven Comics popped our 2013 con cherry with a bang right in our own backyard. OK, not literally our backyard, but certainly close enough given how far we’ll end up traveling this year in the name of indie comics. Our first con? A return trip to Orland Park (a way-south suburb of Chicago), and the newly minted DanCon: Spring show. It was, as they say, business as usual. Lucky for us? That business was good.

DanCon, founded by the appropriately named Dan Royer, is a testament to old-school comic conventions. Held inside the Orland Park Civic Center, the day saw hundreds of local friends, families, and fun-seekers roaming through the two medium sized rooms that held the nerditry. One room for creators, and one for dealers. Betwixt them were registration lines, homemade concessions, and a photo op area. In short? It was everything a li’l con should be… logistically speaking. But that’s not what this write-up is really about. Logistics are important of course (something WizardCon seemingly can’t get right to save their life), but what sets this show apart is the community created around it.

A smaller show breeds interaction. Between fans and creators and between the creators themselves. It’s rare amidst a large show for people to be as relaxed as they were at DanCon. And while there were no D-list celebrities or obligatory Batmobiles to increase admission (or table) prices… those who came, came to buy and enjoy themselves. Not to knock a larger show experience entirely of course; but here was a single day, a single experience, uniting show goers with the core essence of our little area of pop-culture: comic books.

Having attended dozen of shows over the last five years, it’s become clearer and clearer that we all really share a singular experience. Whether our specific offerings target tweens, kiddies, horror fans, cape-lovers, trekkies, or any of the other scads of specific would-be-nerds… we are all united in our persuit of admiration and celebration. With each successive show, comes a familiarity with fellow creators. And that begets a sense of camaraderie. It was fitting that the first three guys I gave the all-too-familiar “nod of hello” to responded with positive comments on my fatherly ability to capture photos of my son and share on Facebook. “Who cares about those Samurnauts, your son is awesome.”

Aside from being able to share war stories with compatriots like “Dashing” Dirk Manning, “Jesus-Lover” Jon Michael Lennon, “Lusts-For-Me” Leo Perez and Tom “My Last Name Seriously Is” Bacon… the real zeal of the day came from a pair of interactions that have filed themselves away as realizing you might just be making it after all.

The first? A fan came walking down the aisle… in one our shirts. Now, let me preface that in five years of actively selling our wares at shows, our only merch has been books and art. The tees that we sport are made on a website, where we literally let them rot, until we need a new batch. On the rarest of rare occasion, people ask where we get them, and we direct them to the site. Aside from a specific set of fans-turned-friends, we never expect to see ourselves out in the crowd. Suffice to say? Seeing one of our shirts unexpectedly was quite the treat.

And the second? Prior to DanCon, I took it upon myself to message a few friends who lived around the area about the show. One such acquaintance, a great gal I’ve known since junior high school, came out amidst her day with their family. Small talk was exchanged, some introductions to my wife and boy (who made a brief appearance), and then a purchase of our book for her son.

I should note that said son exchanged a few great accounts of his recent Spider-Manning to me via his Xbox, and I couldn’t help but wonder if that’d be my own scion in a few short years. But I digress. Not even an hour later, after my friend had left, she’d snapped the picture attached to this article. I know it’s a trope of so many in our position… but seeing even just one small fry immersed in a book I was a part of? It’s what makes so many lost nights and weekends worth it. Of course if said li’l dude shows up next year looking for more books? All the better!

Ultimately, I could think of no better way to kick off 2013 for Unshaven Comics. In this year, on our quest to raise enough capital to finance our way to San Diego in 2014… DanCon 2013 was a fitting start. Thanks in large part an admirable promoter (and his always nice wife and staff), and a well-thought-out convention built to support the community that seeks the intimate interaction a small con excels in. Little did you know, it’s not just affirming for the fans – it’s even more gratifying for creators!