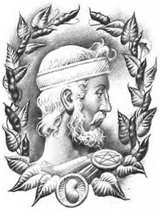 Young and mostly silent Jake, the enigmatic hero of the television program Touch, doesn’t look ancient. Nor does he look particularly Greek. But ah – might he be a reincarnation of Pythagoras? Or at least a fictional character inspired by Pythagoras?

Okay, for you hordes of non-philosophy majors pit there: Pythagoras was probably the first guy who called himself a “philosopher.” He lived about 2500 years ago and he taught that all things were connected, that what he called the One was at the base of everything and that this One expressed itself in numbers. Or such is my admittedly sketchy understanding of Py’s riff.

And Jake? Well, Jake is this kid, about ten, who doesn’t speak but writes or otherwise communicates numbers to his father and eventually, after exciting adventures, Jake’s numbers tie diverse things/people/events together and provide the solution to that episode’s problem.

How does Jake manage his feats? Well…in short, he seems to be a superhero. No costume, no flamboyant displays of abnormal prowess. But we know that Jake has some kind of metahuman ability – he’s a mutant, maybe? – and that there are others like him, and finally that some person or organization has dispatched a geeky assassin to exterminate them.

Though there are echoes of earlier superhero sagas here – Watchmen and the X-Men titles come immediately to mind – Touch is a novel iteration of the superhero concept, and as original as anything in our story-saturated culture is likely to be. That it’s also well-written and acted is a nice bonus.

But what really pleases me about it is what I understand to be its central metaphor. Unlike most of our televised mind-gum, Touch is not extolling the essentiality of family, though Jake’s relationship to his father is important, nor does it glorify the Individual, nor assure us that right makes might, which is why the good guys inevitably out-bash the bad guys. Instead, it displays a notion common to ol’ Py and modern quantum physicists – the Higgs boson crowd – and Buddhists and feel free to add some examples of your own. That notion: everything is connected.

Which is obvious when you think about it, despite the political howls when our current president observed that, sorry, nobody accomplishes anything without some kind of help. You wouldn’t be reading this without the biosphere and the biosphere depends of interaction of gravity with mass and particle and millions of years ago a lobe fish crawled onto land and began the evolutionary journey toward becoming Justin Bieber and and and…and some thirteen-point-seven billion years ago the Big Bang happened and here we are, watching teevee, and passing the popcorn.

I doubt that Touch’s creators are in the business of teaching us cosmology. Their job is to entertain, and in my living room, they do. But they do so without lading on dramatic tropes whose overuse has given them cliché status, and since you and I are united, maybe you’ll join me in being grateful to them.