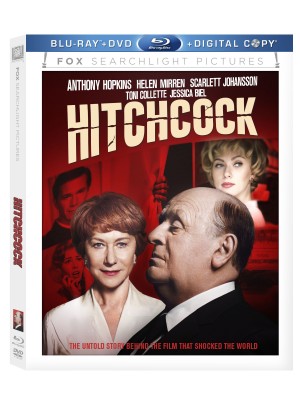 The great innovators and popular entertainers of previous generations often fade from sight from they retire or die. A new generation discovers them afresh, either on their own, or someone has done some digging. In the case of the famed director Alfred Hitchcock, he has spawned a cottage industry with recent biographies and films. Hitchcock, with Anthony Hopkins nearly unrecognizable under the latex, is based on Stephen Rebello’s Alfred Hitchcock and the Making of Psycho, and portrays a particular point of view about the Englishman.

Psycho is currently his best known work, especially with this week’s debut of Bates Motel on cable but critics tend to pick his other, earlier works as among his best. Sure, this thriller is terrifying and exciting and surprising thanks to the Robert Bloch story, direction, and performances. And the making of the film is worthy of exploration. Director Sacha Gervasi has a rich source of material and some fascinating players to explore but the end result is surprisingly slight. Rebello shone a much-needed spotlight on Hitch’s wife Alma (Helen Mirren), the secret engine behind his successes and Gervasi tries to milk tension out of the largely fictitious tension between spouses. When Universal refused to allow access to the source material, Gervasi needed something to hang the film on but clearly chose poorly.

The story picks up in 1959, with Hitch riding the success of North by Northwest and his popular television anthology series that made his silhouette the most recognizable in the country. Seeking his next project, he assigned the research to Peggy Robertson (Toni Colette), his assistant. She came up with Bloch’s novel, loosely based on the famed Ed Gein murders. It had just the right amount of lurid tension that would let him explore something different, something he did throughout his storied career.

Not everyone agreed with the choice with agent (Michael Stuhlbarg), Paramount president Barney Balaban (Richard Portnow), and Alma all thinking it beneath the director, who insisted he wanted the change of pace. When Paramount balked, he moved the film to Universal Studios which welcomed him with open arms. Hitch cast  Anthony Perkins (James D’Arcy) as Norman, Janet Leigh (Scarlett Johansson) as Marion Crane and Vera Miles (Jessica Biel) as sister Lila. There’s plenty of behind the scenes intrigue, saving only the original film’s most famous moments for on camera action where we discover the tyrannical Hitchcock is as prurient as Norman himself.  He later bullies Hays Office censor Geoffrey Shurlock (Kurtwood Smith) into approving the shower scene since more is implied than ever shown. 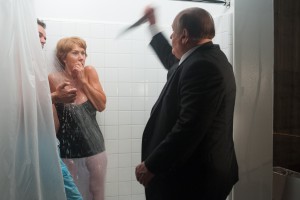 The movie’s more interesting dynamic is between husband and wife and here the film should sing but lacks spark which is odd considering how strong the performers are so the fault clearly lies in the script. There are other missteps along the way including Gein’s ghost, but by then, the film has lost its audience rather than gripped them.

The digital film is well-transferred to Blu-ray and sounds just fine. The combo edition comes complete with Audio Commentary from Gervasi and Rebello, and I wish the film was as interesting as their conversation. There is also a single Deleted Scene (1:41); Becoming the Master: From Hopkins to Hitchcock (12:28) all about Hopkins’ makeup and performance; Obsessed with Hitchcock (29:09), the usual making of documentary; Sacha Gervasi’s Behind-the-Scenes Cell Phone Footage (13:31) which is far more entertaining and informative than you imagine and gets credit for being a unique bonus; Hitchcock Cell Phone PSA (:41); The Story  (3:54); The Cast (4:25) which features with interviews with the director, Mirren, Hopkins, and others; Danny Elfman Maestro (2:16) which is an all-too-brief piece on the evocative score;  Hitch and Alma (3:15), which honestly needed to be more expansive and in-depth; Remembering Hitchcock (4:44): Hitchcock’s former cast and crew members trip down memory lane; Theatrical Trailer (2:33); and, Sneak Peek (14:31).

Overall, the extras bolster a weak production and makes it worth a look. Or, you might be better off reading the bios and watching the actual films from the great master. Hitchcock was terrific at building suspense, adjusting to new technologies and exploring the human psyche in ways his peers at the time avoided, giving him freedom to explore and entertain.