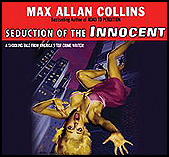 So… Who is the worst, most evil comic book villain ever? Well, if you’re a hard-core comics fan and/or comics professional, the worst comic book villain ever might very well be Dr. Fredric Wertham. He’s the guy who spearheaded the comic books breed juvenile delinquency movement of the late 1940s and early 1950s that led to Senate hearings, state-by-state censorship (Can’t have the word “crime” in the title of your comic book? Really?), massively plummeting sales, and the dissolution of more than half of the comics publishing companies and the jobs that went along with them.

An entire generation of fans grew up loathing the man. His so-called study, which was lacking in any real scientific evidence, was called Seduction of the Innocent. Suffice it to say that a lot of us have had a “thing” about the guy… perhaps none more than massively talented and successful novelist/comics writer/filmmaker/musician Max Allan Collins.

Collins was in a rock band called Seduction of the Innocent that played, among other venues, the San Diego Comic Con pre-show party – his bandmates included Bill Mumy, Miguel Ferrer and Steve Leialoha. It was… loud.

Now he’s repurposed the Evil Doctor’s seminal title in a mystery novel, the third (and hopefully not last) of his Jack Starr private eye stories that revolve around the comic strip and comic book business. Collins writes novels almost as often as I consume barbecue beef sandwiches – for one thing, he’s been co-writing, finishing off, and/or editing the plethora of unpublished material written by his friend, the late crimemaster Mickey Spillane. I wish I could come anywhere near keeping up with his output, but I’ve cut back on the barbecue beef.

But if you’re a comics or a popular culture fan and you only read one Max Allan Collins book this week, make it Seduction of the Innocent. I’d like to say it is one of the best books ever written, but that’s a stupid concept. However, I can say it is one of the most fun books I’ve ever read.

Collins incorporates his massive knowledge of – and enthusiasm for – 1950s popular culture. In addition to pastiches of Wertham and the folks at EC Comics and Lev Gleason Publications, he nods (often with the energy of a bobble-head on meth) towards Dragnet, Mickey Spillane, Al Capp, Dick Tracy, paperback culture, and mid-century culture. Mostly, though, he infuses his mystery novel with a smokepot of comics effluvia – aided by his long-time researcher George Hagenauer. However, if you’re not up on this sort of thing and/or couldn’t care less, it doesn’t get in the way of this clever yarn.

Indeed, I must compliment the author on a great diversionary move. For those of us who are up on comics history, he directs us towards one likely suspect – and then makes a crosstown turn worthy of a Manhattan cabdriver. I won’t spoil this for you, but if you’re curious read Joe Simon’s My Life in Comics.

I must point out that Collins’ long-time comics collaborator Terry Beatty (artist on the current Phantom Sunday pages) supplied the illustrations for each chapter. They are brilliant. Beatty even found an old Leroy Letterer to exacerbate the effect of reading an old (and relevant) EC Comics story.

If you’re looking for a good time and yet want to keep your clothes on, you’ll do well with Seduction of the Innocent. Max Allan Collins’ version, not Fredric Wertham’s.