A two-day KINDLE giveaway for March 17 & 18 of the Western ebook, RANCHO DIABLO: SHOOTER’S CROSS.   has been set up.  The book is the first in a series created and written by Bill Crider, James Reasoner, and Mel Odom under the name COLBY JACKSON. 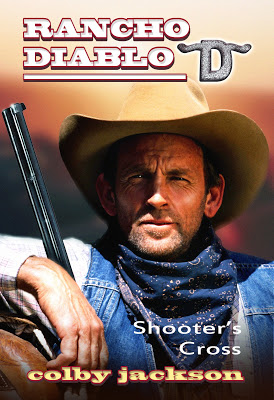 Army Scout Sam Blaylock wasn’t looking for trouble when he rode into Shooter’s Cross, a small Texas town with a colorful history, but he found trouble in spades.  After being nearly killed in an ambush, Sam discovers a patch of land where he thinks he can settle his family, put down roots, and build a future.  Unfortunately, that land has poisoned water and rumors of ghosts.  Sam’s figured a way to fix the water problem, and he’s never been a big believer in ghosts, but he hadn’t planned on running up against newspaperman Mitchell McCarthy, who’s willing to kill to take Rancho Diablo now that Sam has turned the land into a profitable enterprise.
Sam enlists the aid of two friends from the army – fast talking Duane Beatty and gunhawk and fellow scout Mike Tucker – and digs in tighter than a tick to fight back.
COLBY JACKSON IS:  Bill Crider, James Reasoner, and Mel Odom – cumulatively the authors of HUNDREDS of books including Westerns, mysteries, suspense stories, horror stories, and anything else that catches their fancy.  Check them out atwww.billcrider.blogspot.com, www.jamesreasoner.blogspot.com, andwww.melodom.blogspot.com.
Amazon link:  http://www.amazon.com/Shooters-Cross-Rancho-Diablo-ebook/dp/B00472O7NS/ref=sr_1_2?ie=UTF8&qid=1362852772&sr=8-2&keywords=Shooter%27s+Cross
Share