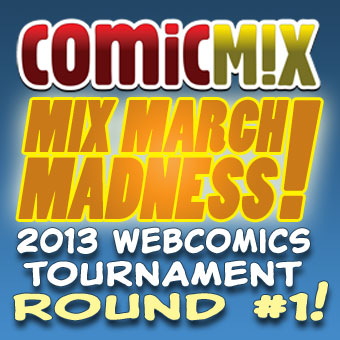 First, some housekeeping details: Both Tom Siddell of Gunnerkrigg Court and Tarol Hunt from Goblins have asked that their strips not be included in this year’s contest. As such, we honor their wishes and raise their retired jerseys into the rafters.

Second, we’ve had $458.40 in bought votes, or an additional 4584 votes. Of particular note was a write in vote for Leftover Soup, donating $10 to the cause, although it wasn’t enough to get it into the final 128. Again, all money goes to the Hero Initiative.

Third, once again, poll traffic has overwhelmed our site, with additional people trying to horn in. To help alleviate the problem, we’re offloading our polling to Opinion Stage. Yes, this does mean that you’ll need a Facebook ID to vote, although anyone can still purchase as many votes as you like.

Finally, here are the brackets. As usual, we’re dividing the 128 candidates into four divisions. This year’s divisions are Bradbury, Kubert, Sendak, and Washington.