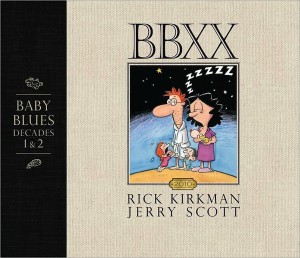 In the early days of 1990, a brand new comic strip debuted, perfect for parents of young children and universal in its humor. Coming from veteran writer Jerry Scott with art by Rick Kirkman, Baby Blues was a pretty quick hit, still running in hundreds of papers. Now in its 23rd year, Andrews McMeel recently celebrated the success with the release of BBXX: Baby Blues Decades 1 & 2.

Unlike a lot of strip collections, this comes with extensive commentary from both creators, annotating and riffing on what prompted particularly strips, gags, characters, and visuals. As a result, this becomes an interesting look back at the development and evolution of a strip that went from two parents and an infant to a five-member family. It caught fire quickly, earning the Ruben Award for Best Comic Strip of the Year in 1995.

Looking back, Kirkman’s early art for parents Wanda and Darryl is simple, emphasizing oversized heads for the bodies with exaggerated features, notably noses. He provided more background detail at first and has simplified his work to the point where there are now just suggestions of background detail.

Each generation appears to create its own family strip with the Nuclear Family of post-World War II represented by Hi & Lois and Family Circle while today we really have Zits! and Baby Blues. All four continue to run, the former two out of inertia while the latter two remain relevant with their contemporary humor. Scott and Kirkman are devoted to focusing on what it means to raise children from birth through toddler-hood through the addition of siblings. The strip opened in 1990 with the birth of Zoe while brother Hammie was added in 1995 with Wren arriving in 2002. As a result, the parents have aged very slowly, from 20-somethings wondering “Now what?” to 30-somethings trying to juggle three distinct personalities and overflowing schedules.

Over the course of the nearly 800 strips in this collection, the last of which is from their 19th year, 2009, you can watch subtle evolutionary changes. Not only in Kirkman’s art but in the gear parents tote around, the technology being used and the children’s fascination with ever grosser objects or fears. The one constant has been their minivan; the same model has been used from the outset. We also get a hilarious breast milk gag that was done to amuse the creators and which was accidentally sent to the editor, who was out that week so it went out to the newspapers. The gag raised nary an objection, much to their surprise. The Los Angeles Times, though, asked for a substitute strip which is reprinted here for the first time.

Hammie was added largely because Scott finally had a child and Kirkman was experiencing the tribulations of having a second child. “There’s a noticeable shift in the strip that began to take place when Hammie arrived. The characters started to become a little more complex, and the situations, broadened.” This is another reason why the strip grew, endured, and remains entertaining after two decades.

Scott notes in Chapter Three, the period when Wren was introduced, as showing the parents had actually learned a few thigns along the way, making new mistakes instead. He noted “as with real parenting, things inevitably even out to a steady DEFCON 3 or 4. At least until middle school.” We can hope they allow the characters to reach that level and see what happens next.

The book contains some great insight into how the strip and its characters were developed with interstitial Scrapbook sections throughout this entertaining collection. The final chapters look at their critics and the creation process so you really get a nicely rounded look at this universal family and their place in the comic strip world.