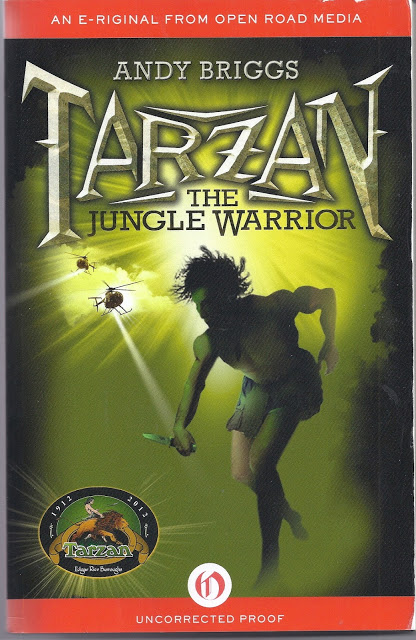 Several weeks ago we reviewed the first book in this new, licensed Tarzan series; The Greystoke Legacy.  Following in the footsteps of Tarzan’s creator, Edgar Rice Burroughs, Andy Briggs continues his new adventures of the Jungle Lord exactly where he left off in this second installment.  Anyone familiar with the original classics is knows that “Tarzan of the Apes” and “The Return of Tarzan,” were actually one story told in two parts.  So it is with this series though it dares to be even more ambitious and by the conclusion of this excellent sequel the saga is far from over.
In the first book, young Jane Porter and her widowed father, Archie, are living in the Congo.  Archie is operating an illegal tree cutting operation with his lifelong friend, Clark. Working at the camp is a young American named Robbie Canler who is on the run from the law.  By the end of that first story, Jane had met the wild jungle man, Tarzan, and earned his trust and friendship.  She had also discovered he might very well be the long lost heir to a British fortune.
In Burrough’s classic “Return of Tarzan,” the principle villain was a sadistic Russian named Nikolas Rokoff and his henchman, Alexi Paulvitch.  Tarzan foiled theirvarious schemes until in the end they traveled to Africa and allied themselves with his cousin, Lord Cecil Clayton, in an attempt to destroy Tarzan and thus nullify his claim to the Greystoke fortune.  In “The Jungle Warrior,” Briggs wonderfully reintroduces Rokoff as an obsessed big hunter who has made a fortune bagging endangered wildanimals for his rich clients.  Having heard the rumors of a “white ape” inhabiting the heart of the Congo, Rokoff and his aid, Paulvitch, set out to find and capture this legend.  The cruel hunger has become jaded and much like his fictional peer, General Zaroff from Richard Connell’s “The Most Dangerous Game,” believes Tarzan will provide him with the most challenging hunt of his life.
Once again we are given a fantastic adventure with some of the most incredible action sequences ever written.  In his works, Burroughs made Tarzan larger than life, almost superhuman in some aspects and reimagining him as anything less would have been a serious mistake.  Not so with this new and exciting interpretation.  Here is wild, amazing action that knows no boundaries and a Tarzan as courageous, magnificent and totally unstoppable as he has ever been.  Reading these new Tarzan exploits is a joyous, fun experience; one no true pulp fan should miss.  We can’t wait for volume three.
Share