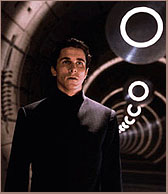 After years of being vaguely aware that there exists a movie in which Christian Bale is the star and the most ridiculously-named martial art ever, “Gun Kata,” is also a thing, I finally sat down to watch Equilibrium last weekend. (Netflix is responsible for many of my viewing decisions these days, for which I am unashamed. The very minute I saw they’d added this, it went in my queue.) From beginning to end and even after the credits rolled, I found myself saying, “This movie is awesome.”

If by awesome, of course, you mean at times both grandiose and sublimely ridiculous. I may also have been laughing hysterically when I said it. I may have even slapped my knee. I may have then gone to Twitter and posted, “OMG you guys, Equilibrium is the craziest movie. The craziest.” Regardless of all of that probably not being the reaction writer and director Kurt Wimmer was going for, I thoroughly enjoyed this film.

Equilibrium is about a post-WWIII future in which some doofus the citizens refer to as “Father” decided that the way to avoid a fourth World War (which it was postulated humanity could not survive) was to eliminate human emotion in the population, and apparently everybody else was just A-OK with that. The movie’s government “eliminates” emotion by a) administering a mind-numbing drug (Prozium) that citizens are required to take at regular intervals; and b) destroying anything remotely artsy or multicolored, and killing those who have tried to keep it because they are guilty of having feelings, which in this film is called a “sense offense.” (I love the way that sounds. “What’s his crime? Sense offense!!!” It’s so dramatic.) The government enforces its will with “Clerics,” who go wherever anyone is, as the Internet would say, “having feels” about something, and, you know, shoots them in the head, efficiently and martial-artsily. (This is where the Gun Kata comes in.)

John Preston (Christian Bale) is the Mary Sue Cleric who is super amazingly good at knowing (one might almost say sensing) when someone is having the feels, and at killing them in various efficient and emotionless ways, and burning art and stuff. There’s also a plot that includes Taye Diggs and is actually supposed to be a driving part of the main storyline, but it pales in comparison to watching Christian Bale a) kill people and burn things in various dramatic ways; and b) manage to somehow get his acting point across while being completely “emotionless.” He’s actually very good at it (and when he finally quirks a tiny smile it’s fantastic). I also suspect this role was superb practice for calm and methodical Batman.

Anyway, actual plot aside, the movie is mostly about what happens when Mr. Mary Sue goes off his meds. Hint: it involves a lot of gratuitous violence. The script has some interesting points it’s trying to make, but they never quite land, and I think it’s because the suspension of disbelief required is just too much. The audience is asked to believe that everyone just acquiesced to this silly “no feelings” rule as the best way to eliminate war; and then the few at the top of the government (who obviously must be having, as the internet says, “all the feels,” while the population gets none, because I doubt they could run the government while on Prozium) use ultraviolent war-like tactics anyway to wipe out anyone who’s still feeling; and so we know the government is corrupt and doesn’t believe its own message; but then we never see any benefit the few government folks who are running the Clerics and everyone else actually get except at one point when we see that the head dude, Dupont, has a nice office (with art!); and, and, and…what exactly is the point being made here? That it’s important to feel things? That art is good? That people will try to repress you using shoddily thin reasoning just for the hell of it? I think it’s trying to say something about free will, but I’m not 100% sure, because the movie never exactly gets wherever it’s trying to go in that regard.

There’s also the fact that none of the people who are supposed to be “not feeling” are that good at it. For instance, Taye Diggs’ character Brandt is a Cleric who keeps saying he’s going to “make his career” with Preston; so he’s ambitious. Which, one would assume, is one of the “feelings” the government would be most keen on eliminating, because ambition can sure cause a lot of war and stuff, eh? Nevertheless, one of the main “unfeeling” characters is practically blazing with ambition throughout the movie. He also shows a tiny bit of (sadistic) humor. Is he off his meds, too? Why would he be? It doesn’t seem to really advance the government’s plans for him to be feeling. It’s a total contradiction. And then there’s Sean Bean’s Cleric, Partridge, who has been on and off his meds and just pretending to be an unfeeling bastard for about two weeks when the movie starts. And William Fichtner’s underground fighter, who is not on meds but forcing himself not to feel so he can help the others who do. And then we find out there are even more characters who somehow suddenly decided to stop their mind-numbing meds and are just pretending. So clearly the Prozium doesn’t work that well, and the government should have fallen long before Superstar Cleric John Preston decided to rebel. It’s all just a little hard to swallow.

But putting all of that aside; oh the fun of this movie! There is a lot to love about it despite the contradictions and leaps in logic, including that it seems to actually be taking itself seriously. (Also that Kurt Wimmer apparently “invented” Gun Kata “in his back yard” Hah!) This is a movie that’s trying to be at least four movies at once – it’s got the serious “dystopian” message; the visual aspect that reminds me at times of an art film (like the scene with Preston at his bedroom window); the “emotional” journey of a lead character; and the amazingly gratuitous violence of a Bruce Willis/Vin Diesel/Jason Statham/insert-other-action-hero-here film, all snuggling up with each other to somehow produce a decently cohesive film.

The dystopian message, while hopelessly muddled, is at least somewhat interesting. Visually, the movie is pretty darned cool. The stark uniforms and buildings; the (hit-you-over-the-head metaphor) contrast of Bale’s black and white outfits; and the way they make the “feeling” underground area a mix of great art and graffiti that contrasts with the colorless overworld are all appealing. Amazingly, Christian Bale’s acting in a movie which for the most part is supposed to be showing people not feeling at all kept me interested, in that kind of “fascinated scientist/trainwreck-watcher way, in what was going to happen next. And the action, while insane, is fun to watch; from Bale taking out a roomful of guards in seconds in a pristine white suit, to the bit where he apparently pushes a button or something and nail-heads suddenly jut from the bottom of two gun barrels so that he can use the guns to more effectively smash guards in the face. (Seriously, who even thinks of that? Or is that an actual real-life thing for some reason?)

Look, I’m not even going to pretend that Equilibrium is a “great” movie, nor that I enjoyed it in the way Wimmer intended. It is ridiculous and violent, with pretensions of grandeur and thinkiness. It’s a little bit Boondock Saints-ish, but with less of a linear point being made, and even more gratuitousness to the violence. It takes itself so seriously that it comes out the other side and becomes slightly cheesy. But the combination of action and attempts at making a grand statement make for a movie that at least kept my attention, and it has the right amount of cheese to make it enjoyable to watch. Despite having only one outright humorous line in the whole film, I laughed a lot. Plus, of course, Christian Bale is smokin’, and we get Sean Bean and William Fichtner acquitting themselves well, too. (If only Oliver Platt had played the government leader Dupont instead of Angus Macfadyen, the casting would have been perfect.) I’m not saying Equilibrium is for everyone; but if you go into the movie for the words “Gun Kata” and “Christian Bale” you probably won’t be disappointed.

So if you’re looking for a movie to watch this week and have streaming Netflix…well, you know what I’d recommend.