Pro Se Productions, a company specializing in New Pulp and Genre Fiction, once more walks the cutting edge of storytelling with the debut novel of author Nick C. Piers featuring the first adventure of New Pulp’s wildest, weirdest Private Eye ever to don a fedora!   THE CITY OF SMOKE AND MIRRORS: AN ARMADILLO MYSTERY!
Dilbert Pinkerton’s not the greatest private detective, but he’s good at sniffing out clues. Of course, it’s hard to take a five-foot-nothing mutant armadillo in a trench coat and fedora seriously. He sticks his snout where it doesn’t belong far too often while digging for the truth.
So when some rich dame asks him to steal – ahem, retrieve – a pearl necklace from her ex-husband, Dill almost reconsiders. Until, that is, she offers him far too much money that he can’t refuse. Now, Dill heads to Nevermore Bay, home of The Buzzard.
Most in Nevermore Bay think The Buzzard is just a myth created by the local police force. Whether that’s true or not, Dill can’t help but be curious by the mystery. When he runs afoul with this fowl, though, things go to hell and fast. Not only are the police after him, but Dill must also contend with some of The Buzzard’s rogues, mobster Don Komodo and his goon squad, and even The Buzzard himself.
With everyone in the city against him, what hope does Dill have just to get out of there with his carapace intact? 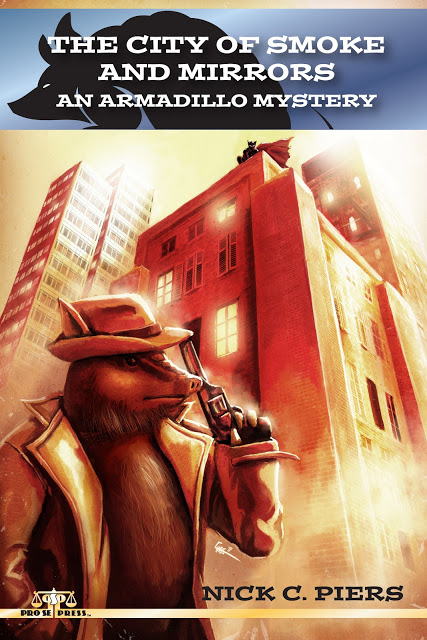 “This idea,” stated Tommy Hancock, Partner in and Editor in Chief of Pro Se Productions, “is everything New Pulp should be, even though its leading man is a mutant armadillo!  It is fun, larger than life, over the top action and adventure, with tips of multiple hats to comic books, hard boiled crime stories, and more!  Nick brings a ridiculously vibrant life to Dill and everyone else that walks through these pages!  Get your Dillo on now with this first great adventure of many!”
THE CITY OF SMOKE AND MIRRORS by Nick C. Piers featuring Cover Art by Chris Sheehan and Logo and Design by Sean E. Ali is available directly from Pro Se’s Createspace store at https://www.createspace.com/4183031 and at Amazon at https://www.createspace.com/4183031 for $15.00!
Also available for $2.99 at Amazon on the Kindle, at Barnes and Noble for the Nook, and in various formats at www.smashwords.com!
Pro Se Productions- www.prosepulp.com!
Share