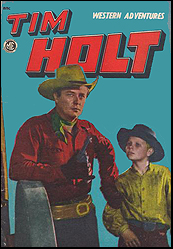 Know how to take things in stride

They always have their pride

Atrocious! Add your own melody and hold your nose.

I made up that ditty, or one close to it, years ago and I don’t know why. (To provide a contrast to good verse? To avoid thinking about something I should have been thinking about?) Shrug.

But it’s in my head today, maybe, is because last night on what we refer to around here as “the cowboy channel” had a “six gun salute” to Tim Holt, who was one of my favorite actors when I was six or seven. Five old movies: I watched two and recorded the other three for watching late at night when I’m not ready for the trek to the bedroom but should be. He was a favorite of my childhood, was ol’ Tim, and he had credits beyond the many B westerns he acted in, including roles in The Treasure of Sierra Madre and The Magnificent Ambersons. Looking at him on a television screen last night, I think I grasped the reason the snotnosed version of myself liked him: he seemed nice.

But is this not a column appearing in a site devoted to comic books? So why am I blathering on about old old oaters?

First reason: there is a connection between comics and Mr. Holt. He had his own comics title that ran in the late 40s and earl 50s. In issue #20, he began wearing a red mask and calling himself – wait for it – the Red Mask. Eventually, the Red Mask took over the title and the Tim Holt persona quietly retired. (Did the Red Mask meet up with the Lone Ranger, the Durango Kid, and the Two-Gun Kid and did they mosey on into town and drink sarsaparilla and talk about keeping masks purty and the finer points of shooting hog legs from the hands of owlhoots? Reckon we’ll never know.) If I were in a folksy mood I might say that Tim was let out to pasture, but, despite the previous sentence, I’m not feeling particularly folksy and besides, that wouldn’t be true. Which brings us to…

Second reason: Tim Holt the actor (as opposed to Tim the character) didn’t exactly go out to pasture and there was a connection between Mr. Holt and a friend of mine, the late and beloved Archie Goodwin. Those of you who have entered our world recently may not know that Archie was an excellent comics editor and writer and an incredibly nice guy. Archie once told me that, after his movie career, Tim Holt relocated to Oklahoma where he managed a radio station and knew Archie’s father. Who knew?

A final note: What I call the cowboy channel is really the Encore Westerns channel. For me, checking into it once in a while is a mini-nostalgia trip, a backward glimpse into times, places and attitudes that no longer exist. For you young’uns…I don’t know–maybe you’ll see a connection between what are sometimes called “horse operas” and what are often known as “space operas” and maybe you’ll find that interesting.