Additional casting for the 50th anniversary Doctor Who special An Adventure in Space and Time has been trickling out slowly as filming has proceeded.  Today it was revealed that the role of the second Doctor, Patrick Troughton, will be played by Reece Shearsmith, a member of the surreal comedy team The League of Gentlemen. The team also includes Doctor Who writer and actor Mark Gatiss, who wrote the anniversary adventure. 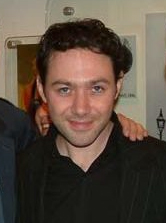 “I first asked Reece 12 years ago when I started thinking about this project.” Gatiss was quoted in the Mirror. “We were in the midst of League of Gentlemen and I just remember thinking, if anyone plays Patrick Troughton, it should be Reece. Like the Second Doctor, he’s small, saturnine and a comic genius. The complete package. He thought it was a fantastic idea and I’ve kind of nurtured it all this time.”

While the team have been long-time fans of the series, Reece is the only member of the League not to have made an appearance in the returned show.  In addition to writing several episodes for the new series, Mark Gatiss played Dr. Lazarus in The Lazarus Experiment, voiced one of the Spitfire pilots in his episode Victory of the Daleks, and was almost unrecognizable under makeup (and a pseudonym) as Gantok in The Wedding of River Song.  Steve Pemberton played Strackman Lux in the Moffat-penned two-parter Silence in the Library / The Forest of the Dead.

While he’d not made it to the big game till now, Reece’s history with Doctor Who is quite long indeed.  His first professional acting credit is with the fan-produced Doctor Who Homage series P.R.O.B.E. a production written by Gatiss.  The show attempted to pay homage to Doctor Who, even casting many classic Who actors like Caroline John (playing her Who role of Liz Shaw) and several Doctors including Peter Davison.

An Adventure in Space and Time is a dramatization of the creation of Doctor Who, centering mostly on the show during the early years, and the growing professional relationship between first Doctor William Hartnell and the show’s producer Verity Lambert.  It will be one of the last productions to be produced in the original BBC Television Centre, where the original series was filmed,  before the property is redeveloped.  David Bradley (Argus Filch from the Harry Potter films) will play Hartnell, and Call the Midwife‘s Jessica Raine will portray Verity Lambert.