REVIEW: “The Completely Mental Misadventures of Ed Grimley” is as fun as fun can be, I must say.

God bless the deranged maniacs at the Warner Archives and their desire to not let anything be forgotten.  As part of their exponentially-growing manufacture on demand DVD program, they’ve added to their already impressive list of animated releases with a 2-disc release of Hanna-Barbera’s The Completely Mental Misadventures of Ed Grimley. 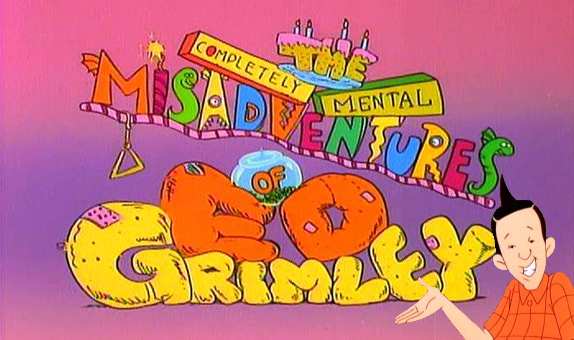 Martin Short has had a wide and varied career in comedy, and inamongst appearing on SCTV, Saturday Night Live and his film career, he created a character named Ed Grimley.  Formed from equal parts of sight gags from his SCTV days and a voice he used to do to annoy his wife, Ed caught on with America during Short’s SNL run.  When NBC and Hanna-Barbera looked for a way to compete with CBS’ Pee-Wee’s Playhouse, the hyperkinetic Mr. Grimley was tailor-made.

Featuring a mini-reunion of the SCTV gang, the series features Martin in the titular (a word you want to hear more often, and so seldom do) role, with Andrea Martin and Catherine O’Hara, with Joe Flaherty reprising his SCTV creation Count Floyd.  Jonathan Winters rounded out the crew, adding in his comedy genius.

The comparison to Pee-Wee is easy to make on the surface, but at its base, Ed’s show was a surreal take on a sitcom, as opposed to the kids show parody of Mr. Herman.  Ed has no desire to find adventures; he’s more than happy practicing his triangle and enjoying the company of his neighbors at the palatial Freebus Arms.  But adventure seeks him out, and before you can say “Uncle Balfour’s favorite Mantovani record” he’s running n a horse race or getting a new identity after testifying in a robbery trial or being whisked to Kansas via a hurricane.

Ed Grimley was one of the last shows made at Hanna-Barbera before their purchase by Turner, and was one of its last truly original works.  With character work and story direction by Scott Shaw! the show had a unique voice that stood above the sadly dying world of Saturday Morning cartoons.  It’s popped back up on Cartoon Network on occasion, but thanks to Warner Archives, fans can get their triangle on whenever they please.

The 2-disc set is available from The Warner Brothers Shop.