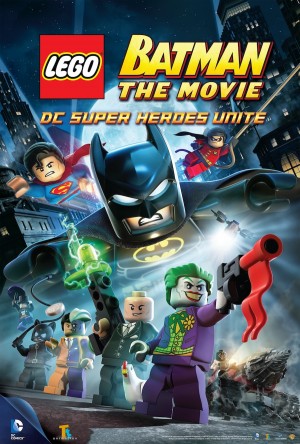 Clancy Brown, the quintessential voice of Lex Luthor, will walk the red carpet and take part in the post-screening panel discussion when Warner Bros. Home Entertainment and The Paley Center for Media present the World Premiere of LEGO Batman: The Movie – DC Superheroes Unite in New York on February 11, 2013.

Brown set the benchmark for all Lex Luthor voices with his iteration of the role for Superman: The Animated Series and Justice League/Justice League Unlimited, and he has reprised the voice in several TV series episodes as well as the DC Universe Animated Original Movie, Superman/Batman: Public Enemies, and now for LEGO Batman: The Movie – DC Superheroes Unite.

The World Premiere will include red carpet media interviews starting at 5:15 p.m. and the first-ever public screening of the film at 6:30 p.m.  Following the screening, cast and filmmakers will discuss the movie. Joining Brown on the panel will be TT Animation’s award-winning director/producer Jon Burton and director of photography Jeremy Pardon, and renowned videogame/animation actors Troy Baker (Bioshock Infinite, Batman: Arkham City) as Batman and Travis Willingham (Avengers Assemble, The Super Hero Squad Show) as Superman.

LEGO Batman: The Movie – DC Superheroes Unite, an all-new film from TT Animation based on its popular video game, finds Lex Luthor taking jealousy to new heights when fellow billionaire Bruce Wayne wins the Man of the Year Award. To top Wayne’s accomplishment, Lex begins a campaign for President – and to create the atmosphere for his type of fear-based politics, he recruits the Joker to perfect a Black LEGO Destructor Ray. While wreaking havoc on Gotham, Lex successfully destroys Batman’s technology – forcing the Caped Crusader to reluctantly turn to Superman for help.

Warner Bros. Home Entertainment has set May 21, 2013 as its release date for LEGO Batman: The Movie – DC Superheroes Unite on Blu-ray and DVD.

Brown made his very first theatrical appearance opposite Sean Penn in Bad Boys, and then forever sealed his place in fantasy villainy as The Kurgan in Highlander. Before playing an immortal, though, Brown etched his name in cult classic history as Rawhide in The Adventures of Buckaroo Banzai Across the 8th Dimension. Brown is regularly recognized from his standout performance as Captain Hadley in The Shawshank Redemption, as the centerpiece of HBO’s Carnivale as Brother Justin Crowe, and to fanboys across the planet as gung-ho Sgt. Zim in Starship Troopers.

The Paley Center in New York City is located at 25 West 52nd Street. There is no attached parking, however there is ample parking in numerous structures surrounding the Paley Center.