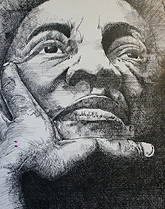 Last week I started telling the tale of Mike Richardson, CEO, publisher and owner of Dark Horse Entertainment and the hit he has put out on me. Please refer to part one before reading this.

I’ve written hundreds of pages and produced dozens of preliminary drawings for the project but now it was time to produce the book.

This was (is) a dream project and I wanted to do wonderful if not award winning work on it. I was so happy it was finally green lit I did the one thing I shouldn’t have: I became obsessed with the process.

This went on for about a year. Then one day I realized my problem, the format the script was in was not working for me. I then wrote the story as a novel. After about three months I realized writing a novel was a stupid as shit way to do a graphic novel.

Then I figured it out, write the script as a novella (short novel) then illustrate that.

That process took another few years.

Before I go on it’s important for me to tell you that like Mike Richardson was busy with a multitude of projects during the years it took to green light my project, I had nowhere near the workload of Mike but while working on the Underground I also had numerous on my plate. 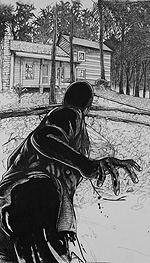 I don’t want to give you the impression that all I was working on was The Underground and was taking years to complete it. During the time I was working on the Underground I was also the head writer on a television show, creating content in a joint venture with a large entertainment company, not to mention writing two books and writing and illustrating another graphic novel and writing two weekly columns, one of which is for ComicMix.

However, Mike Richardson runs a massive entertainment company, yes he has a staff but Mike makes it a point to be involved and he takes the time to make sure the project is right before he green lights it. That’s why Mike’s involvement took the time it took.

After my project got the go ahead no matter what else I had to do it doesn’t matter I should be finished with the Underground by now.

It will still be a few months but in an effort to show Mike some of what I’ve been doing I’m premiering some of the art here. Hopefully Mike will see this and call off the hit.

I hope so; the last two people who owed Mike a graphic novel were Tupac and Biggie.