FORTIER TAKES ON THE LATEST SENTINELS-METALGOD! 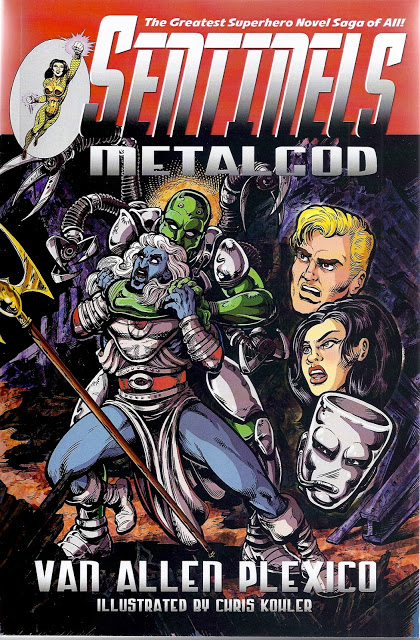 Getting this book was pretty much like getting an extra Christmas gift for this reviewer.  Go through these archives and you will discover we’ve been reading Van Plexico’s Sentinels series since day one; and applauding all of them.  Of course the inherent danger with any long running series is that the writer will become tired of the concept and characters and begin to offer up deluded stories missing the verve and punch of his or her earlier entries.
Well, rest easy, Sentinel fans old and new, “Sentinels – Metalgod,” is another top notch chapter in the saga of Earth’s mightiest super-heroes.  Without skipping a beat, this new book picks up where the last story arc end; the cataclysmic battle between the Sentinels and a trio of super beings all bent on the complete destruction of our planet. (Note, if you haven’t read those books yet, you have some serious catching up to do.)
So in the wake of the Sentinels miraculous victory over these outer space threats, the team finds itself divided.  With their leader, super powerful Ultraa, locked in stasis in a giant red gem, Pulsar (Lyn Li) returns to Earth with the remnants of the team minus scientist Esro Brachis who has opted to visit the alien worlds of Kur-Bai Empire with Mondrian, a beautiful Captain in the Kur-Bai Starfleet with whom he is infatuated.  They are traveling with aboard a fleet starship commanded by Devenn, leader of the Kur-Bai super warriors known as the Elites.
No sooner does Pulsar and company return to Sentinels HQ then a new super being calling himself Law appears and, taking control of the Earth’s communications satellites, broadcast a warning that the Kur-Bai areactually planning to an invasion the Earth.  It falls squarely on Pulsar’s shoulders to deal with this mysterious new character while at the same time trying to recruit new members to help bolster the team’s decimated ranks.
At the same time the Elites, nearing their home world, are attacked by a Kur-Bai starship crewed by powerful robots called Eradicators.  Esro and the Elites discover a military junta has taken over the governing body of the empire and they have been labeled outlaws to be captured and imprisoned.  Barely managing to foil the Eradicators, they make their way to a Kur-Bai space station and there learn the full extent of the events that have befallen their people.  A power-hungry admiral of the fleet has successfully orchestrated a coup, killing thousands of loyal citizens in the process. A full scale civil war is about to erupt throughout the empire and Devenn and his Elites are caught right in the middle.
Those of you who are fans of this series understand itshomage to Marvel Comics’ Avengers.  “Sentinels – Metalgod,” now tips its literary inspiration cap to that classic sci-fi TV series, Babylon 5.  Filled with political shenanigans, outer space battles, empire civil wars this book catapults readers into a whole now universe of action and adventure while at the same time injecting it with a marvelous wry commentary on today’s shallow attitudes about fame and popularity.  The scenes of Pulsar meeting her German based fan club had this reviewer in stitches.  Plexico’s enthusiasm for this series has never been stronger and that is evident on every single page.  If you aren’t a Sentinels fan yet, it’s high time you checked it out. This kind of reading fun doesn’t come along every day.
Share