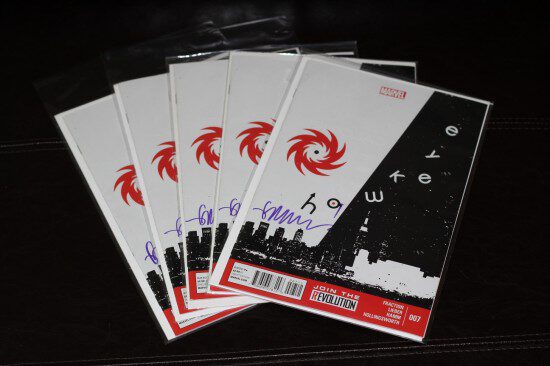 First off, let my introduce myself. I’m Sara. Normally you don’t hear from me because I work behind the scenes, helping keep the technology that runs ComicMix running, writing code to implement new features and being an all around source of technical knowledge. I’m a recent convert to comics, and I’d like to do things to be involved with the community of fans and creators. When I heard Matt Fraction was going to be at my go-to comic shop, House of Secrets, I was ecstatic.

Fraction is donating all his royalties from writing hurricane themed Hawkeye #7 to the Red Cross to help the victims of Superstorm Sandy, and signed copies at House of Secrets in exchange for additional donations (he raised $722.60). I braved the crowds to get my copies of Hawkeye #1 – 7 signed, threw in a donation and picked up five extra signed copies of Hawkeye #7, because I want to give you all a chance at one of these. Inspired by Matt and his wife Kelly Sue DeConnick’s twitter donation drive, I decided to do the same thing.

So here’s the deal. Make a donation to the Red Cross, grab a screenshot and donate in honor of Hawkguy and tweet it at us (@comicmix) or email it to hawkeyecontest@comicmix.com or leave it here in a comment. Feel free to let @mattfraction and @kellysue know you’ve donated too. We’ll let this contest run for five days, since I have 5 copies, and end it at midnight EST on Monday, February 4th. On Tuesday the 5th I will make a big spreadsheet of everyone who contributed and entered and randomly pick five of you to mail these to. It’s that simple! You do something good, and maybe get a free signed copy of Hawkeye #7.

By day, mild mannered programmer, experience engineer, sometimes designer of games. By night, duct taping ComicMix's servers back together and hacking together WordPress css. Also, I read lots of comics, make stuff and obsess over video games and what to cook for dinner.