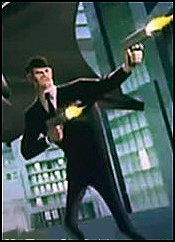 Pop quiz: Who’s that guy over to your left with the bowler hat and the two guns blazin’ away?

To nobody’s surprise, Cartoon Network (an arm of Time Warner) cancelled Young Justice and Green Lantern and will be replacing them next summer with an original cast return of Teen Titans and the long-lurking Beware The Batman. So here’s a clue: yes, that piece of art is from Beware The Batman.

So it’s kind of surprising to see Batman’s butler Alfred being recast as – literally – an ex-secret agent who likes to run around doing the one thing that Batman – the “real” Batman – would never, ever do: run head-first into a situation with his two guns blazin’ away, presumably at the bad guys.

Bats and Alfred aren’t alone in this new endeavor: Katana will bravely and boldly go where no ‘Toon has gone before. And if you think there will be a bed scene with Kat and Alfred, you’re thinking harder than they are.

This latest attempt to resurrect the success of the brilliant Batman Animated series from 20 years ago, evidently by people who either didn’t see it or didn’t understand it. The show will be featuring villains new to Batanimation although, again from the look of the promo art, they seem to be clones of the villains from Bob Clampett’s classic Warner Bros. cartoon The Great Piggy Bank Robbery. But I’ll bet the latest crop of Warner animators don’t know that. From watching their output, I doubt they even know of Bob Clampett.

DC Nation. Another banana republic, without the class or style.