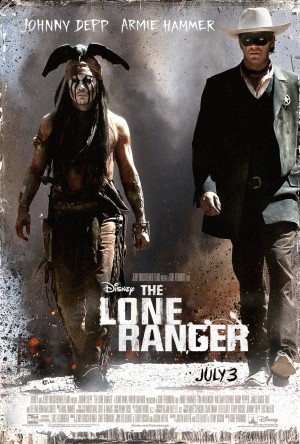 You’d think Disney would do something to acknowledge this week being the Lone Ranger’s 80th anniversary but that would, you know, make him feel dated or something. However, since it’s running early we want to clue you in about this sneak peek.

BURBANK, CALIF. (January 29, 2013)–Disney announced today that they will be debuting a brand-new :90 sneak peek for the highly anticipated Disney/Jerry Bruckheimer Films summer blockbuster The Lone Ranger on Sunday, February 3, during the CBS Pregame Show 2:00 PM EST. In conjunction with the release of the new footage, Disney will hold a sweepstakes that offers participants a chance to win prizes provided by SUBWAY® restaurants and Kawasaki.

To participate in The Lone Ranger “Who Will You Ride With on Game Day” Sweepstakes* and get a chance to win prizes for “You and Your Kemosabe,” tune in and follow @LoneRanger on Twitter.  For a chance to win, after the sneak peek airs answer trivia questions about the spot correctly and use #LONERANGER in the reply. All correct entries will be entered in a blind drawing for a chance to win a prize pack, such as Kawasaki helmets, SUBWAY®  gift cards, and more.  Each prize pack includes two prizes, one each for “You and Your Kemosabe.” The sweepstakes will end February 4, 2013, at 3:00 p.m. PST. Entries will also be accepted via email to lonerangersweeps@thaweb.com.

Starting today, fans can also text RANGER to Disney** (347639) to receive a Tune In reminder to watch The Lone Ranger new footage debut during the CBS Pregame Show and, in addition, receive updates on The Lone Ranger.

From producer Jerry Bruckheimer and director Gore Verbinski, the filmmaking team behind the blockbuster Pirates of the Caribbean franchise, comes Disney/Jerry Bruckheimer Films’ The Lone Ranger,  a thrilling adventure infused with action and humor, in which the famed masked hero is brought to life through new eyes.  Native American spirit warrior Tonto (Johnny Depp) recounts the untold tales that transformed John Reid (Armie Hammer), a man of the law, into a legend of justice—taking the audience on a runaway train of epic surprises and humorous friction as the two unlikely heroes must learn to work together and fight against greed and corruption.

A Disney/Jerry Bruckheimer Films presentation, The Lone Ranger is directed by Gore Verbinski and produced by Jerry Bruckheimer and Gore Verbinski, with screen story by Ted Elliott & Terry Rossio and Justin Haythe and screenplay by Justin Haythe and Ted Elliott & Terry Rossio. The Lone Ranger releases in U.S. theaters on July 3, 2013.