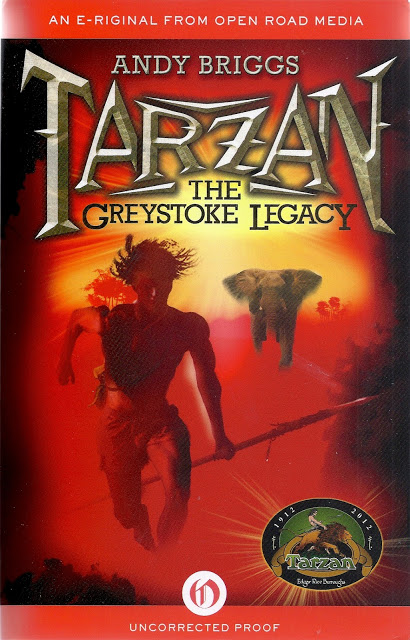 We’d vaguely heard mention someone was going to be re-launching a new, modern version of Tarzan a while back then promptly forgot all about it.  These kind of re-imaginings have been tried before with various pulp heroes; most of them have failed miserably and are better left forgotten.  Thus when one of the marketing agents for Open Road Media contacted us about reviewing Andy Briggs new Tarzan books we were curious enough to accept their gracious invitation.  The books arrived two weeks ago (they are also available as Ebooks) and we were anxious to dig into them.
It is important that we make it resoundingly clear that Tarzan of the Apes as created and written by Edgar Rice Burroughs is one of ourfavorite fictional characters.  Having discovered Burroughs books in paperback format during our teenyears, we devoured most of them and particularly cherish the first two; “Tarzan of the Apes” and “The Return of Tarzan.”  Together they tell one of the most amazing yarns ever put to paper and from which an entire cottage industry was born.  Tarzan is easily one of the most recognizable figures of all times and has been portrayed in movies (starting with the silent era), TV series, comic books, radio and who knows what else.  His venerable tale is of man’s daily struggles with survival, the preservation of his natural environment and the steadily encroaching beast that is modern civilization.
After having read, “Tarzan : The Greystoke Legacy,” we confess to having been wonderfully surprised at just how well it was both conceived and executed.  Briggs is a truly talented writer who is obviously a true fan of Burroughs’ original stories and he reshapes the origin of the Ape Man with both a logical presentation and a great deal of reverence for the classic source material.  Unlike Burroughs, who lived in a time when his background setting for Tarzan was a still largely unexplored “Dark” Continent, Briggs is challenged to offer us a hero whose jungle home is a rapidly dwindling landscape endangered daily by multiple factions.
Burroughs never once, in his many books, ever offered us scientific details of the wildlife and flora of the savage jungle he wrote about.  Not so in this retelling.  Yet, despite his handicap of portraying an authentic wilderness, Briggs never loses sight of the intrinsic nature of his hero; Tarzan is a savage being nurtured by the law of the jungle.  He kills his enemies and protects his friend, be they beast or human.
Jane Porter is a troubled, lonely young woman, who has followed her father into Congo where he and his partner are operating anillegal tree-cutting operation.  When mysterious acts of vandalism begin plaguing the camp and slowing down the work, those in charge believe the sabotage to be the work of militant rebels hiding deeper in the jungle.  One night someone sets fires to the machinery and Jane, disorientated by an explosion, awakens to find herself lost in the jungle.  When he is found and rescued by a half naked white man calling himself Tarzan, she is propelled into an adventure that will both alter her world view and awaken an inner strength and courage she didn’t know she possessed.  All because of this strange, mysterious man who dwells amongst the giant apes of the forest.
The last thing this reviewer desires is to spoil the exuberant, grand adventure this book presents by giving away scenes that are both fresh while echoing the iconic trappings of this legendary figure.  “Tarzan : The Greystorke Legacy,” is a rousing, hugely entertaining read that respects it heritage while offering us a truly exciting “new” Tarzan for our times.  We can’t wait to dig into book two.  Stat tuned, Tarzan fans.
Share