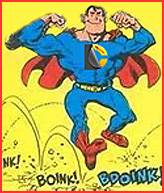 At the onset of the New52 there was a buzz and excitement over the flagship character of DC Entertainment. Known as (perhaps) the most recognizable comic book character of all time, Superman was all set to be relaunched for a new age… towing the company behind his Nehru collar and underpantsless new uniform. Well, here we are now 16 months after the super-retcon, and I ask you… are things as we’d all hoped?

In a word? No. In more than a word? Not a chance. In a timely metaphor? Not even by a Joe Flacco longshot. The Superman property is, just as it was prior to the New52: convoluted, marred by an already high barrier to entry, and choked on it’s own backwash of continuity errors and creator squabbles. The real question emerges: Why did it all go wrong?

Well, one finger of shame lay with a writer I admire quite a bit. Grant Morrison, for all his amazing contributions of the craft of comic bookery, just over-promised and under-delivered his new Big Blue Boy Scout. The pitch for Action Comics in the New52 was perhaps the boldest of its brethren to see the light of the comic rack. Ditching years of backstory to start us “five years before the present” in a new origin for the character. One that would return him to the roots of his golden age; where he was a more human Superman… fallible, nuanced in his personal politics, and more “of the people.” And for what it was worth the book had a strong start that left unto itself, was quite enjoyable. And then Morrison got itchy.

Action Comics crammed updated concepts and plot threads with reckless abandon. By the time the first arc was over, eight months in, we’d be treated to literary cacophony. I quote myself from my review of Action Comics #8:

“In eight issues we get a shiny new take on Lois Lane, Lex Luthor, Jimmy Olson, Brainiac, Metallo, Steel, the Legion of Super Heroes, the Phantom Zone, the bottle city of Kandor, the history of Krypton, a horde of Kryptonian villains-to-be (that frankly I don’t feel like scouring Wikipedia for names), and of course… Superman himself.”

Suffice to say, I could spend the remainder of this article going over my thoughts on the super Scottsman, but I digress. Morrison was but a single rusty cog in a faulty machine. That is to say he didn’t really have much of a chance to succeed.

As we all know, comic books are first and foremost a business. And as such, a business exists to turn profit. That means that even though continuity would be better understood and appreciated if a single Superman saw the shelves every month… DC and the powers that be would never let such a large property draw on the fan base just once every thirty days. The last(ish) son of Krypton was also being seen in the pages of Superman, another monthly… run by the always-popular, always-festive George Pérez.

Superman was placed in the present of the DCnU, which of course led most readers tackling both books trying to connect the dots of Morrison’s tee-shirt work-boot Supes versus Pérez’s Lee-designed line-riddled version. And where as Action dealt with legacy villains and plot threads… the modern take had new unmemorable villains, awkward call backs to Action comic plot threads, and more focus on “action” than its sister title. This led to an early exiting Pérez, citing editorial discrepancy and a lack of freedom on the book.

In less nice words? Morrison (whether he knew it or not) was driving the character, and Pérez wasn’t along for the ride. Shortly thereafter, new teams were swapped in, and Superman got to fight run-off villains from Wildstorm. And even now Superman, Girl, and Boy are all sharing a (terrible) crossover book… whilst Action slowly ties up its loose ends for Morrison’s announced departure. DC put its editorial eggs in Action Comics, and has let the “family” just mess up the living room while Daddy works downstairs.

This isn’t how to keep a fan base. The whole notion of the New52 was to eliminate confusing backstory, and hook in new readers. It takes time to do this. And hurling two books in two timelines, with conflicting information, new and old villains, all while placing the same character in a team book that takes place at some point between the two main books…. does not make it easy for a new reader to come aboard. Hell, I’m exhausted even typing that.

A short while back I lamented about my guarded optimism (or maybe it was pessimism) over the Man of Steel movie set to debut this year. Recently, super scribe Scott Snyder was announced to have a new ongoing at DC alongside the never-late-on-a-book-except-when-he’s-late-which-is-often-because-he-has-a-very-busy-schedule Jim Lee lending his artistic arm for however long it takes for him to be late again. And while Scott Snyder has done no wrong by me since I’ve picked up his previous titles (all being Bat books), I’m nothing if not entirely skeptical. I gave Action a shot until issue nine, and then fell off. H’El on Earth looked atrocious (and reports from my Unshaven Cohort Matt, who is reading it, confirms this fact). Does anyone else feel the winds of change gathering up under our feet? Could a decent turn at the box office and a shiny new book just make us forgive and forget 48+ books featuring a Superman marred by every convoluted problem he faced long before we knew what the New 52 was?

I’m certain we’ll forget. Superman Red and Blue anyone? Anyone? Bueller? Bueller? But forgiveness is another story. And empty promises have always been the kryptonite of the comic book reading public. Your move, DC.