Atlanta, GA—Mechanoid Press, a new New Pulp publisher, is pleased to announce the publication of their first anthology, MONSTER EARTH!
Welcome to a world where the Cold War was fought not with the threat of nuclear destruction, but with Giant Monsters.

Watch as the denizens of this Earth that might have been learn to harness the power of these legendary creatures for good and ill. In these seven tales you’ll witness first hand as…

All this and more await you in the pages of MONSTER EARTH!

Join editors James Palmer (Slow Djinn), Jim Beard (Sgt. Janus, Spirit-Breaker) and some of the most talented voices in New Pulp, including Nancy Hansen (Prophecy’s Gambit), Edward M. Erdelac (The Merkabah Rider series), and I.A. Watson (Blackthorn: Dynasty of Mars) as they take you on a guided tour of a frightening vision of Earth…

MONSTER EARTH harkens back to the classic giant monsters of yesteryear like Godzilla, Mothra, Gamera, and King Kong, while focusing on the human element and what it would be like to live in such a world where giant monsters terrorize the Earth.

“There have been a few other giant monster anthologies over the years,” says Palmer. “But our book is going to be a bit different. It has a unifying concept, as well as a solid pulp style of storytelling.”

Developed by MONSTER EARTH co-editor Jim Beard (writer, Captain Action and the Riddle of the Glowing Men), each story in the book takes place in a different decade of the 20th century, which leads to a Cold War fought with giant monsters rather than the threat of nuclear weapons.

The stories in MONSTER EARTH have a strong human angle as well.

“Focusing in on the human beings living in this world is important to me,” says Palmer. “The monsters are like forces of nature, with the humans trying to control them. But don’t worry, these aren’t just regular human interest stories with a monster thrown in for window dressing. There are plenty of great monster battles and more than enough citywide destruction to please the most discerning kaiju fan – and anyone who loves a good tale.

The book sports an awesome cover by Eric Johns inspired by the American release of the Godzilla film Destroy All Monsters.
MONSTER EARTH is available in print via Createspace http://www.createspace.com/4125968
and Amazon: http://www.amazon.com/Monster-Earth-James-Palmer/dp/0615753469/
It is also available as an e-book from Kindle: http://www.amazon.com/dp/B00B0QIVAE
and Smashwords: https://www.smashwords.com/books/view/275981
About Mechanoid Press:
Mechanoid Press is a new imprint specializing in science fiction, New Pulp, and steampunk ebooks and anthologies. For more, visit www.mechanoidpress.comor follow the robot revolution on Twitter. You can also like Mechanoid Press on Facebook. 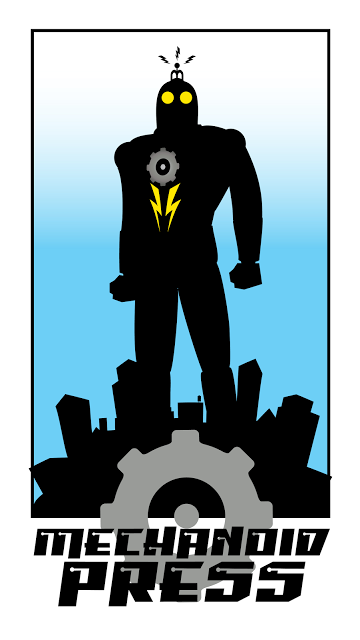