Matthew Holness first rose to notoriety with his character of  Garth Marenghi; author, dream-weaver, visionary, plus actor.  He’s a perfect creation, all the insufferable genre authors boiled down to one.  Holness has returned with another author and another genre, and takes the story in the opposite direction.  A Gun For George, available for viewing at Britain’s Film4 website, is a short film featuring a down on his luck author who’s angry at the world for the loss of his brother, and his popularity. 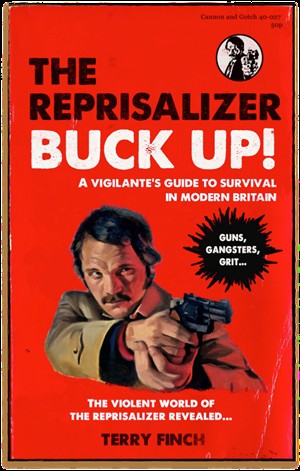 Terry Finch is the author of the (once) popular Reprizalizer series, a two-fisted vigilante, taking to the criminals of suburban England.  He’s self-deluded, down on his luck, and angry at the world about it.  While you laugh at garth and look forward to someday seeing his head trapped in farm equipment, Matthew makes you feel for Terry.  His books are clear Mary Sue fiction, but with the world of Men’s Adventure series as their base, series like the Mack Bolan books that emerge from Gold Eagle press with astonishing regularity.  Terry is hanging onto life by his nails, trying to sell his books door to door to make enough to repair his car, George, named after his brother.  But when an old fan bequeaths him the contents of his council flat, including a loaded revolver, the implication is that Terry may finally erase the line between reality and fantasy.

Holness is a contemporary and collaborator with the gang from The Mighty Boosh, as well as popular comedians Richard Ayoade ([[[The IT Crowd]]]) and Matt Berry ([[[Snuffbox]]]).  It’s a darker comedy than the Marenghi work, and features none of his past collaborators.  Marenghi is an ego-trip on two legs, while Finch is a poor and desperate man, unwilling to admit that his books are a thing of the past, if indeed they were ever much popular at all.  The film switches between modern day reality and Finch’s revenge fantasies, filmed in the style of a seventies “One man against crime” film trailers.  Terry’s past is only alluded to, but it can be easily inferred that his books are an impotent strike back against the real assault of his brother George, which is why they are so important to him.

Holness is representative of a lot of British humorists who don’t feel the need to crank out non-stop product of questionable quality, preferring to take their time a craft the work to perfection.  This short film is an example of why that can be a very successful process.  No news on if we’ll see any more of Terry Finch in the future, but what we have seen here was well worth the wait.