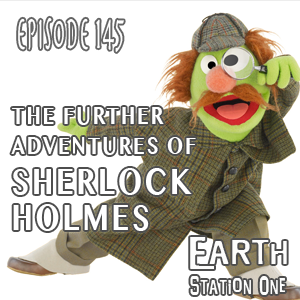 This week, the Earth Station One podcast crew celebrates the birthday of one of the most iconic characters in literature, Sherlock Holmes. Joining ESO co-hosts Mike Faber, Mike Gordon, and Bobby ash for cake, ice cream, and mystery are guests Ashley Bergner, Doctor Q, and Ron Fortier, who also takes a turn in The Geek Seat. While the World’s Greatest Detective deducts what presents we brought without opening them, we investigate his legacy and current popularity. We also chat with entertainer and musician Ken Spivey about his upcoming Time Lord Fest. Plus the usual Rants, Raves, Khan Report, and Shout Outs!

Join us for yet another episode of The Earth Station One Podcast we like to call: The Further Adventures of Sherlock Holmes at www.esopodcast.com.
Direct link: http://erthstationone.wordpress.com/2013/01/09/earth-station-one-episode-145-the-further-adventures-of-sherlock-holmes/