“Go Get A Roomie!” gets a Kickstarter 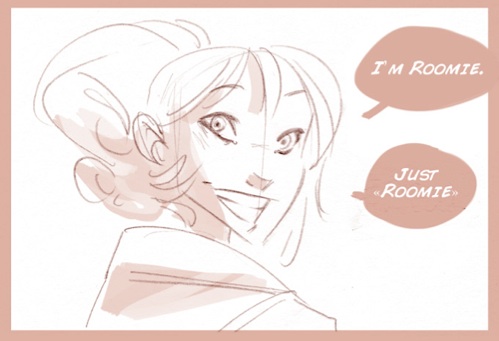 We are incredibly fond of Go Get A Roomie! here at ComicMix. The comic won our May Mayhem NSFW Webcomics Tournament back in May, and their fans voted with their pocketbooks as well, raising hundreds of dollars for the Comic Book Legal Defense Fund to put them way over the top.

And now, they’re putting it all down on paper.

Since its first page, the comic has been there to corrupt the world with fond smiles and happy sighs. If it can continue to do so through a new printed form, it would make a dream come true. Not only will the first book of Go Get a Roomie include all of chapters 1-12, but countless other extras as well! Bonus chapter, illustrations and sketches, redrawn comic strips, drinking game, kitties, a sneak peek at a secret project, and much more!

via Go Get A Roomie! Book One by Hiveworks Comics — Kickstarter.

They’ve already blown past their initial goal of $20,000 in the first day, so it’s going to be funded, but they have lots and lots of stretch goals… at $30,000 they’ll throw in some extra charms and stickers free for everyone ordering at least a book. At $50,000 they’ll throw in a bonus book only chapter on top of the mini chapter already being put into the book, and at $75,000 they’ll get Little one plushies made and add them to anyone getting at least a book. Lord only knows what they’ll do if they hit $100,000– but I think they better start planning for it.

Watch the video– then go get your own Roomie!