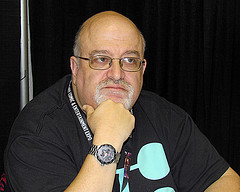 As stated yesterday on his web log, Peter had a stroke. So we are at the beginning of what is going to be a long road. We have a diagnosis, which is a small stroke in the Pons section of his brain. Now we have to figure out where we go from here and how we get Peter back to what he was before the stroke. We know that a total recovery is slim because damage to the brain doesn’t go away but the brain can be trained to work around the damage and give Peter back what he has lost.

I am dealing with a lot of woulda, coulda, and shoulda issues right now. But we are where we are and we are working out a plan of recovery.

What happened was that we were in Disney Hollywood Studios having just had lunch at the Prime Time Café. We were walking to the front gate because we were off to Animal Kingdom to see a friend of ours perform in the Finding Nemo Show. Peter had been tired and also not sleeping well the past week or so. He had been taking naps in the afternoon to catch up on the sleep that was eluding him at night. He told me that he had blurry vision in his right eye. The way he described it to me sounded like an ocular migraine so we took him back to the Hotel and went onto Animal Kingdom. We got back and he was working on his next novel. We decided to go to dinner but he was still having a slight vision problem so I drove.

While at dinner I thought his speech was a bit slurred. He put it down to fatigue and his face always looked like that. That morning he couldn’t get his right leg to move correctly. He told us later that he had gotten up because he couldn’t sleep and tried to type and couldn’t get his hand to work correctly but he didn’t want to wake me up and alarm me. I called my mom with the laundry list of things. My mother said get him to a hospital NOW. We loaded him into the car and took him to Celebration Hospital at the recommendation of some friends.

Celebration Hospital did a great job of getting him in and starting treatment. His blood pressure was scary scary high so their first job was to get it back to closer to normal. They did some tests and a CAT scan to check for a stroke. The CAT scan didn’t show anything but they were going with their observations and the evidence that his blood work was not good and getting worse. The decision was made to transfer him down to Florida Hospital in downtown Orlando where they could do an MRI and some other tests Also Florida hospital has the best cardiac unit and they were worried that he had a heart attack or a cardiac episode (having told Peter that he might be having a cardiac episode, he put on his best comic guy voice and said, ”Worst Episode Ever.” So Ariel got to take “ride in an ambulance” off her bucket list as she went down to the hospital with Peter while I dealt with getting us out of our hotel room.

So I am betting that in this point of the narrative you, if you know our family, are asking where is Caroline while this is all going on. She was and is in Jacksonville with her sister and Peter’s eldest daughter, Shana. Currently we haven’t told her what is going on but that is going to change in the next couple of days. So she is having fun with big sister and her playmates in Jacksonville. Shana has been a rock in all this and a champ about taking care of her little sister while all this has been going on. I have been able to concentrate on Peter right now.

He went into the Florida Hospital in the Cardiac Care Unit as they try to ascertain what exactly happened. They did an MRI about midnight along with some other tests. They came to the conclusion that it was not a heart attack but a stroke and moved him to the neurology unit where he is now.

As he stated, he has lost most of the use of his right arm, his right leg is incredibly weak, the vision in his right eye is blurry, and the right side of his face is drooping slightly. But the brain is there with all its quips and quick retorts. He has had the nurses laughing a lot.

Today we figure out what the next step is and where it is going to happen. Tonight the New Year Begins and for us it is a very different beginning than we thought we were going to be having.

Thank you everyone for your good wishes, prayers and kind words. They do help. And BIG thank you to our Orlando buddies who have taken us into their houses and helped us deal with what is going on.

Continue to think good thoughts for Peter. This is not going to be easy for him or us but we will get through this together.

I am grateful that my husband is still alive.