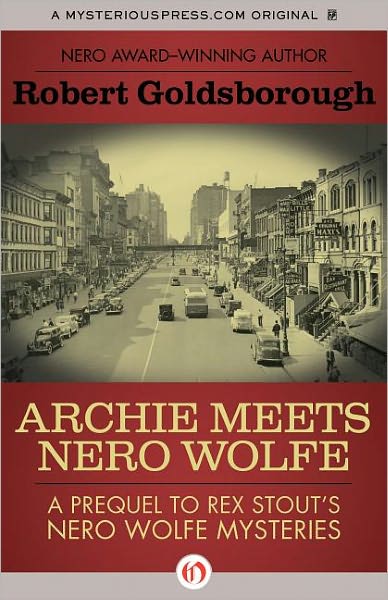 If you are a lover of books, then the passing of a favorite writer brings on a great deal of sadness; especially if that writer had been the author of a well loved series.  Such was the case for thousands of mystery lovers when Rex Stout passed away in 1975.  For all intents and purposes this also brought about the demise of his beloved characters, Nero Wolfe and Archie Goodwin.
The following eleven years saw most of Stout’s Nero Wolfe mysteries reprinted countless times in various editions; all of them treasured by his fans.  Still the thrill of joining these familiar figures on new cases seemed to be a lost cause.  Then, in 1994, journalist Robert Goldsborough wrote “Murder in E Minor,” a brand new Nero Wolfe mystery much to the delight of the majority of Stout fans.  Note, I say majority.  In matters such as these, there will always be the vocal purists who see new stories as sacrilegious and prefer such fictional heroes end their careers with the death of their creators.  We are clearly not of that attitude.  We thoroughly enjoyed Goldsborough’s efforts and felt he had captured Archie’s voice perfectly.  He would go on to write six additional titles in the series ending them in 1994 with “The Missing Chapter.”
At which point, annoyed by the criticism of that minority we mentioned, Goldsborough went on to create his own original mystery series featuring a Chicago reporter of the past named Snap Malek.  Several of these have won prestigious genre literary awards.  Still, when looking at our Nero Wolfe titles on our bookshelf, we regularly hoped that some day he would return to that familiar brownstone on West Thirty-Fifth Street in which dwells the rotund detective and his handsome legman, Archie Goodwin.  That he has done so in such a spectacular fashion is a cause for unabashed celebration.
Not only has Goldsborough answered our pleas, but he has gone beyond our wildest dreams in offering up the story Rex Stout never did; the tale of Archie’s first meeting with Nero Wolfe.  Painstakingly culling through Stout’s canon, Goldsborough took the slim nuggets seeded throughout the dozens of books and short stories and meticulously put them together in a working timeline.  From these morsels he then went on to craft a truly complete and traditional Nero Wolfe mystery only with a major difference; we finally are allowed to witness the first ever meeting between these two remarkable characters. Let us assure you, it was worth the wait.  Reading “Archie Meets Nero Wolfe,” had us remembering our teenage high school days when we first picked up our first Wolfe paperback.  This book is in essence a joyous family reunion.
It should be noted that the very first Nero Wolfe mystery, “Fer-De-Lance,” appeared in 1934 during the days of the Great Depression.  Goldsborough deftly sets his story in the same era wonderfully researching his background for authentic slang, clothing, automobiles and the city itself so the reader is transported back into that time.
Now the book’s actual mystery plot resolves around a rich hotelier’s eight year old son being kidnapped.  The man hires the famous Nero Wolfe to save the boy.  Wolfe, as is his habit, then recruits his regular group of private investigators; all of whom are quite familiar to any fan of the series.  Only this time there’s a new face in the crowd, an eager beaver fresh of the bus from Ohio who has connected himself with operative Del Bascomb.  His name is Archie Goodwin and he is very, very eager to show Wolfe how capable he is.  As ever Goldsborough delivers a true by-the-rules puzzle astute readers will relish in trying to solve before Wolfe’s traditional in-house gathering at the finale.  But the true heart of this book is the fun in watching a young, brash, would be private-eye encounter the man who is going to be his mentor and closest friend.  Goldsborough again captures Archie’s voice brilliantly and in doing so takes us on the ride we’ve all been waiting for a long, long time.
Mystery fans, if you or a loved one is a Nero Wolfe fan, you could not give them a better Christmas gift this year than, “Archie Meets Nero Wolfe.”  Then watch the smiles on their faces when they unwrap this truly great book.  Tell them Santa sent you.