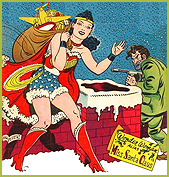 The responsible thing to do this week would be to write about The State of Women in Comics. With Gail Simone booted off Batgirl, coupled with Karen Berger’s departure from Vertigo, one can conjure all sorts of misogynist conspiracy theories, and one would have more than a 50% chance of being right.

But I don’t want to write about that. For one thing, I don’t have any inside knowledge, so I would only be speculating.

Here’s the thing. Comics is such a small world that I know both of these women. I worked with Karen for the better part of a decade, threw the launch party for Vertigo in my apartment when I couldn’t get DC to pay for it, and enjoyed her work a great deal. I don’t know Gail as well, but I’ve met her a few times, I love her writing, admire her work for the Hero Initiative, and think she’s a really classy person.

These are big names in the business. I am not. But comics is still low-profile enough that we are, more or less, peers. Or at least colleagues.

I was reminded of this last week, when I hosted our annual Hanukah party, the first one since my husband died. It was a bittersweet occasion, an event he loved very much. I thought it was an outrage that he wasn’t here for it, but I also thought it was important to continue the tradition. Life goes on, despite my best efforts.

My friends came out to support my son and myself, and that’s what friends do. The guest list isn’t just my friends from comics. It’s my friends from different aspects of my life, including my son and his friends. My apartment isn’t so large that the comics people can avoid the knitters, or the anti-war people can be in a room separate from my high school pals.

One of our guests is an aspiring comics creator whom I introduced to a few pros at New York Comic-Con last year. He happily told me about the other people in the business he’d met since then, and how great each of them had been to him.

And there isn’t anybody I wouldn’t defend against the attacks of the broader culture, the sneers of elitists who look down on the medium (fewer every day).

We’re in this together, and we have each other’s back. It reminds me of this lyric:

Faithful friends who are dear to us

Will be near to us once more

– “Have Yourself a Merry Little Christmas”

And that brings me to my wish for you this season.

Someday soon, we all will be together

If the Fates allow

Until then, we’ll have to muddle through somehow

So have yourself a merry little Christmas now.

Or, of course, the solstice holiday of your choice.