WEIRD WESTERN COMIC IN THE WORKS-WELCOME TO PARIAH, MISSOURI

Ventura, California – December 7, 2012 – Doing something creative that you love is a challenge.  Finding an audience for your work and getting paid for it is even harder.   Andres Salazar understands those struggles.  Andres is a stand-up comedian,  has directed and produced short films, written screenplays even sells his paintings at craft fairs.  Most recently Andres has turned to the crowdfunding website, Kickstarter.com to find an audience and realize his dream of being a creator.
His latest project is a graphic novel titled Pariah, Missouri–a supernatural story set in pre-civil war.  He wrote it originally as a television pilot script in hopes to get attention from the cable networks.  “I pitched it as Deadwood meets Buffy the Vampire Slayer, but nowadays you gotta have the script, a cast and director attached and half of it shot before they will look at you, and that’s only if you have an agent, manager and have previously worked on three shows,” says Andres.
So instead of beating his head against Hollywood’s doors, he turned to other mediums to tell the tale.  “When I conceived Pariah, I wanted something that I could tell graphically since comics have been my love as a kid.  It’s much cheaper of course to generate a comic and this is a good way to build a fan-base and that is always something that Hollywood wants to see,” says Andres.  Turning an hour drama script into a comic book is not without it’s challenges.  An artist needed to be found so Andres turned to sites such as Deviantart.com to find affordable and dependable artists.
“That was a challenge.  I mean, I could have drawn it myself, but comic book art takes an incredible amount of time, plus there is value in adding others creative juices to the mix.  I was lucky to find a great artist like Jose,” says Andres.  Jose Luis Pescador is no stranger to the comic book world.  He studied at the National Autonomous University of Mexico and has worked on a number of independent graphic novels and has shown fine art in galleries across the country. 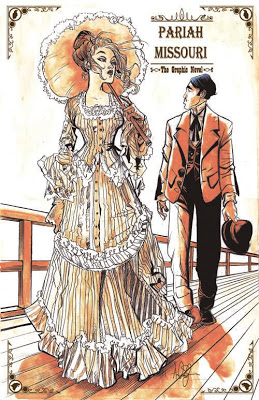 His super-team was assembled, but Andres still needed funding.  Enter Kickstarter.com  Kickstarter is a new phenomenon in what is dubbed crowdfunding which gives creators a chance realize their ambitions by asking others to “back” their project.  From films, music albums to food, Kickstarter generates hundreds of projects daily in the hopes that they meet their funding goal.  If the goal is achieved, backers then receive rewards according to their pledge amount.
Having worked for Howard Chaykin as an assistant, Andres learned much of the business from his mentor.  Andres also wrote and directed SAG short film After Cheri and stated , “We are very excited about our Kickstarter for Pariah, Missouri!  It will be an exciting story for the next 30 days to see how we progress through the campaign.  I will be posting videos and updates often so backers really get a sense of the “behind the scenes” of what it takes to make a comic book.  Please check us out.”
For a 23 page preview of Pariah, Missouri- go HERE.
To see the Pariah, Missouri Kickstarter campaign to go: http://www.kickstarter.com/projects/andresjsalazar/pariah-missouri-the-graphic-novel
###
If you’d like more information about the Pariah, MO graphic novel or to schedule interviews with Andres
Salazar please email andresjsalazar@gmail.com or call 805-746-6884
Share